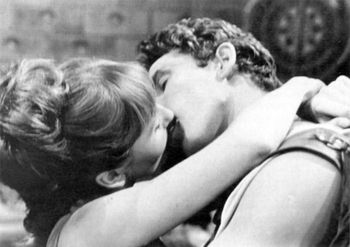 {loud sucking noise}
Cassandra: Then woe to the house of Priam. Woe to the Trojans!
Paris: I'm afraid you're a bit late to say 'whoa' to the horse. I've just given instructions to have it brought into the city.
Advertisement:

The one where the Doctor nearly gets launched in a giant paper aeroplane.

Written by Donald Cotton. This four-episode serial first aired from October 16 to November 6, 1965.

Episodes: "Temple of Secrets", "Small Prophet, Quick Return", "Death of a Spy", "Horse of Destruction". All four are missing.

The TARDIS and occupants arrive on the plains outside the city of Troy in the middle of a fight between Hector and Achilles. Hector is distracted by the Doctor, believing him to be Zeus (he arrived right in the middle of some lightning strikes), and Achilles kills him. The Doctor attempts to leave, but is prevented from doing so by the arrival of Odysseus, who scoffs at the idea of the Doctor being Zeus. He takes him back to camp, and Steven follows to try and rescue him. Meanwhile, the Trojans find the TARDIS and take it inside their city. Both the Greeks and the Trojans turn out to inhabit a massive World of Snark, and Menelaus reveals that he's not too keen on having his cheating tart of a wife back anyway.

Meanwhile, Paris captures the TARDIS, believing it to be something of value that would make a nice sacrifice to the Gods. Priestess Cassandra calls him an absolute idiot for not realising the TARDIS is a trap, and that there are probably soldiers inside the thing. (She had a dream earlier about a horse and is pretty upset about the whole business.) Instead, Vicki comes out, and decides to just tell the truth about who she is, which entirely fails to impress the Trojans. King Priam is willing to listen to her, though, although he considers "Vicki" a ridiculous name and makes up the name "Cressida" for her instead.

With the TARDIS gone, the Doctor is forced to admit he is in fact a mortal. Agammemnon orders him killed, but Odysseus forces the Doctor and Steven to tell him the truth about who they really are. He accepts their story and, since he's not quite as clever as the legends make him out to be, he gives them two days to come up with a way for him to capture Troy and end the decade-long war. The Doctor briefly considers the whole wooden horse business but discards it as myth. They come up with a plan: Steven, pretending to be Diomedes pretending to be Achilles, intentionally gets himself captured by a very reluctant Paris and ends up in Troy. This backfires immediately when Vicki blurts out his name and they're both thrown into the cells as Greek spies.

After trying to avoid it, the Doctor gives up and gives Odysseus the idea for the wooden horse. Troilus, Paris's brother, has meanwhile developed a bit of a crush on Vicki and genuinely believes that she's some kind of witch. She tries to tell him the truth, since the crush is mutual, but all her claims of not having any magic are moot when the Greeks suddenly disappear and leave behind nothing but a horse. Vicki is hailed as the woman who magicked the Greeks away, and the horse is brought into the city, where the Greeks (including the Doctor) promptly invade. During the final battle, Steven is wounded by Paris and assisted to the TARDIS by Katarina, a handmaiden of Cassandra. Vicki can't bear to leave Troilus, and she hastily stays behind while the Doctor, Steven and Katarina leave in the TARDIS.

Vicki and Troilus decide to take their chances with the enraged victims, while Katarina firmly believes that she's been sacrificed to the Gods and that the TARDIS is the afterlife. The Doctor doesn't bother correcting her.

Much like The Gunfighters, "The Myth Makers" is largely a comedy until the Mood Whiplash of the final episode.