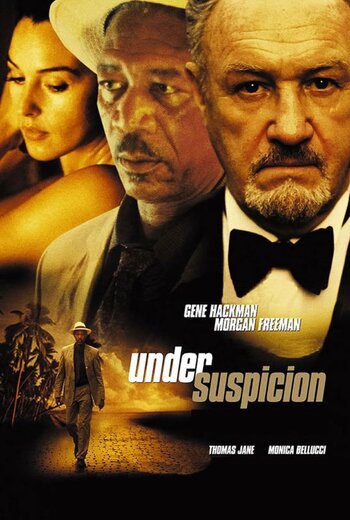 Under Suspicion is a 2000 film directed by Stephen Hopkins.

Henry Hearst (Gene Hackman) is a wealthy Anglo tax attorney living in Puerto Rico, with a smoking hot and much younger wife Chantal (Monica Bellucci). He is on his way to a fundraiser for hurricane victims one evening when the local police chief, Capt. Victor Benezet (Morgan Freeman) calls him into the office for "ten minutes" of questioning. It seems that Henry recently discovered the body of a murdered child while he was out on his morning run, and Victor wants to resolve some details about Henry's statement. However, when a tuxedo-clad Henry shows up in Victor's office, it soon becomes clear that the police think Henry did it—partially because of some inconsistencies in his statement, but also because his car was seen not long ago near the location where another child was murdered.

Thomas Jane appears as Detective Owens, the other investigating officer. This film is a remake of 1981 French film Garde à vue.

Not to be confused with a 1991 British film starring Liam Neeson.