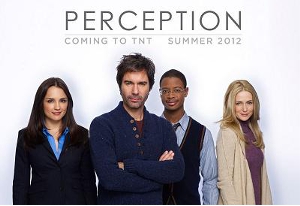 "Reality... is a figment of your imagination."
— Dr. Daniel Pierce
Advertisement:

Perception is an American crime drama on TNT centered on a brilliant and eccentric neuroscientist who works as a well-liked university professor. On the side, he is recruited by the FBI, through one of his favorite ex-students, to work as a consultant for some of their more confounding cases. With the uptick in cases come flare-ups of the professor's notable mental ailments.

The show premiered on July 9, 2012, after TNT greenlit 10 episodes for the first season. A second season was announced in August 2012 and ended after three seasons, the final episode airing on March 17th, 2015.