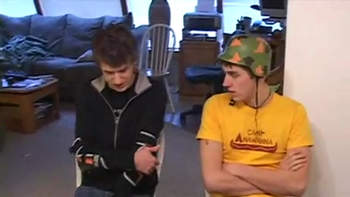 I wear the helmet because I'm not very creative.
"So...Why are we on YouTube? Craig you wanna take this one?"
"No..."
"I'll take this one..."
The First Lines of Probably Going to be Called "The Allen Show"

Allen (as played by Allen Murphy of Evil Iguana Productions) wants to be famous and make movies. To achieve this desired fame, he decides that he and his friend Craig (played by Craig Deering) are going to become the next big YouTube phenomenon by creating their own series of videos. Craig would rather be left alone to go to college and eat apples, and usually takes the part of Cowardly Sidekick in Allen's schemes for notoriety. The show follows the various ups and downs of Allen's misguided attempts at making a funny YouTube experience, as well as the backlash that the boys receive for their antics. Allen, even though the show portrays him as Craig's one and only friend, can be kind of a Jerkass and often his plans disregard the safety, sanity, and humility of Craig. Hilarity Ensues.

The premise of almost every episode is about making the episode, which means the videos tend to be Leaning on the Fourth Wall quite a bit. Despite the characters', mostly Craig's, assumptions that they are extremely unpopular and that many of their viewers are just family, the video and other programs made by Evil Iguana Productions have gained a moderate following. The increase in fandom can be seen in the Growing the Beard / Jumping the Shark moment of the advent of the second "season", after the location was changed to Craig's college apartment and a theme song change was made.