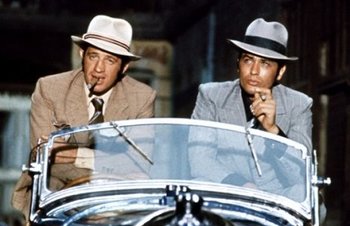 Borsalino is a 1970 French-Italian film directed by Jacques Deray and starring Jean-Paul Belmondo, Alain Delon and Michel Bouquet. It is adapted from Bandits à Marseille, a 1959 book by Eugène Saccomano.

Roch Siffredi (Delon) goes out of prison. He hears that his girlfriend Lola has a new boyfriend, François Capella (Belmondo). He meets him in a bar and they fight, but eventually they become friends. They start working together and soon they try to move up the ladder in the underworld of Marseille.

The film had a sequel in 1974, Borsalino & Co. It was directed by Jacques Deray and starred Alain Delon.