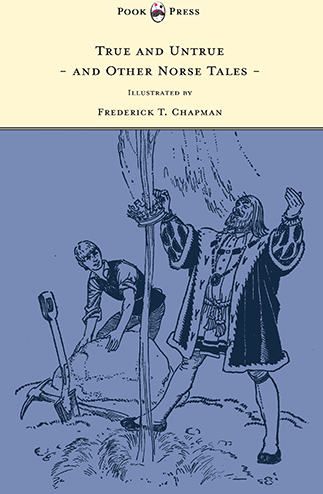 True And Untrue is a Norwegian Fairy Tale collected by Peter Christian Asbjørnsen and Jørgen Moe.

True and Untrue were brothers, and their widowed mother sent them away to earn their living. Untrue persuaded True to share his food, and then jeered at him for want to share his, and True observed he was indeed Untrue. Untrue gouged his eyes out.

True groped about and found a large tree. He decided to climb it for fear of animals; he would know it was morning by the birdsong. A bear, a wolf, a fox, and a rabbit gathered there to celebrate St. John's Day, and each recounts about a cure for the ills of the king of England, including restoring his eyesight. True uses it on his own eyes and can see. Then he takes a job with the king, and when the king complains of his ills, True fixes them one by one. The last is to cure his daughter, which wins him her hand in marriage.

Untrue comes to the wedding to beg bread. True gives him a little food and sends him off to the tree where he had learned his things last year. Untrue climbs it, but the animals show up, and the bear announces that someone obviously eavesdropped last year, so they won't talk now.

Compare with The Grateful Beasts.