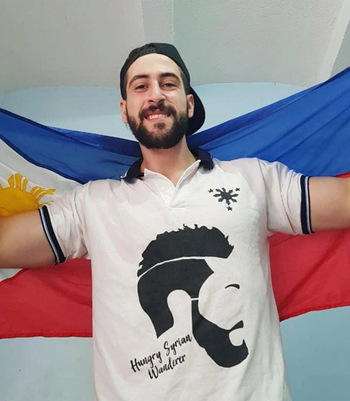 The adopted son of the Philippines.
Advertisement:

Basel Manadil (Arabic: باسل مناديل‎), also known as The Hungry Syrian Wanderer, is a Syrian-born Filipino vlogger and entrepreneur best known for his videos chronicling his life in the Philippines as well as his charity work towards the less fortunate and disaster victims.

Manadil was born to a Lebanese father and a Syrian mother in Homs, but was forced to evacuate in 2013 when the Syrian Civil War broke out—his parents and sister moved to Lebanon (and later to Saudi Arabia) while Basel moved on his own to the Philippines where he studied and graduated with a degree in Computer Engineering at the University of Perpetual Help. He was however unable to land a job, and as such he decided to start a blog where he goes around the Philippines chronicling his experiences in various landmarks and tourist attractions, singing praises about how he fell in love with his adopted country as well as its people and culture.

He also currently owns a 50s-style diner named the "YOLO Retro Diner", as well as a Korean-style convenience store named "Yeoboseyo Korean Mart" (whom he originally meant for a Korean former friend of his prior to falling out with him over an alleged betrayal on part of the Korean).