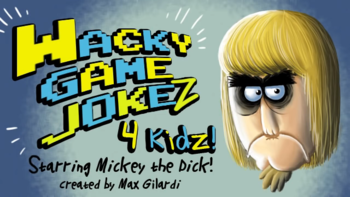 A 2010 Animated Web Series created by HotDiggedyDemon, Wacky Game Jokez 4 Kidz! (abbreviated WGJ4K) is a video game-based comedy show that centres around Mickey the Dick, a cynical, belligerent street thug from the slums of New York City who is kidnapped by the corporation Video Game Videos (VGV) (for reasons never explicitly stated) and is forced into being the creator of a online video game parody series, alongside his production crew in the form of hardcore gamers Eric and June.

What makes this an unbearable punishment for Mickey is the fact that he has a massive disdain for anything related to video games, and frequently expresses this by tormenting his co-workers, destroying equipment, not co-operating with orders and generally acting like, yes, a dick, much to the chagrin of his boss, who is equally no stranger to Mickey's abuse.

. Despite the story ending on a very ambiguous note, creator Max Gilardi has no intent on reviving the series for a second season or shorts. Instead he dumped the storyboards for the scrapped season 2 here

WGJ4K has an episode where Mickey reads questions from the viewers. Neither side is very respectful towards the other.

WGJ4K has an episode where Mickey reads questions from the viewers. Neither side is very respectful towards the other.