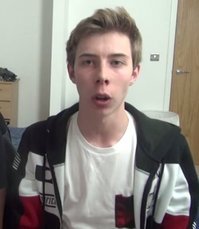 If you fancy yourselves some Ultimate Team coins, then check out The FUT Shop. I'm gonna leave a link down below, and make sure you use "Calfreezy" at checkout to get a discount. Enjoy the video, guys.

" or simply "Freezy" (and a whole plethora of Embarrassing Nicknames), is a British YouTuber known for his FIFA gameplay videos, usually with other FIFA YouTubers. He's also known for being a frequent affiliate of the Sidemen. He shares a London flat with Harry Lewis (wroetoshaw of the Sidemen) and Callum McGinley (Callux), and thus Freezy works with his flatmates frequently.

, which hasn't gotten an update in five months.

He participated in 2015's Legends of Gaming

competition alongside the likes of Harry and ComedyShortsGamer, and was revealed as the competition's seventh legend. You can see a playlist of Freezy's LOG videos here