For a list of characters in the Discovery Channel program. 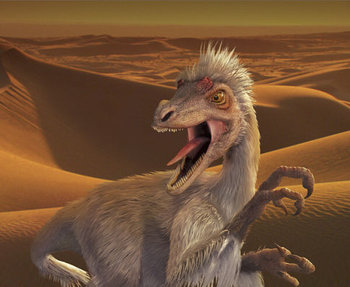 A small intelligent carnivorous theropod that is presented as living and hunting in packs. It's also the main focus of the episode, represented by all three of the episode's named characters. 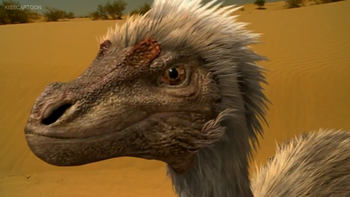 A young female who struggles to survive and rebuild her life after losing her old pack. 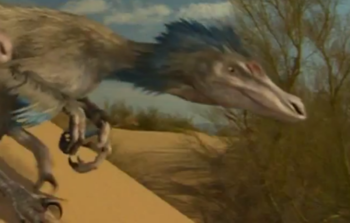 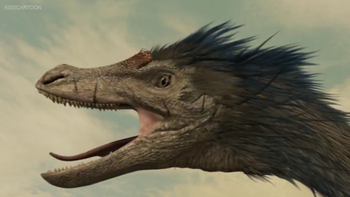 An old male and leader of his pack.
Advertisement:
Protoceratops andrewsi
A small early ceratopsian that roams the desert in small herds. Their abundance makes them a common prey item and background creature.
Oviraptor philoceratops
Strange feathered omnivorous theropods, depicted as aggressive rivals to Velociraptor.
Prenocephale prenes
A mid-sized dome-headed herbivorous biped that lives in small family groups.
Shuvuuia deserti
A small solitary insectivore that only appears in one scene.
Deltatheridium
A nocturnal mammal that makes a brief one-time appearance.
Advertisement:
Lizard
A small lizard that appears throughout the early parts of the episode.

Pyroraptor olympius
A small pack-hunting dromaeosaur that serves as the focus species of the episode. 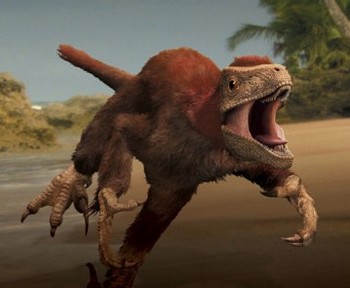 A young male and the leader of his sibling pack. 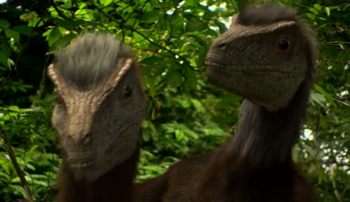 A pair of young female Pyroraptor who make up the rest of Pod's sibling pack.

A trio of aggressive miniature island-dwelling dromaeosaurs.
Troodon
Small, intelligent carnivores that appear in the latter half of the episode.
Ichthyornis dispar
A prehistoric toothed seabird.
Advertisement:
Tarascosaurus
The largest carnivorous dinosaur in the European island chain.

Magyarosaurus
A smaller island-dwelling relative of the mainland titanosaurs.
Titanosaur
A large herbivorous dinosaur from the mainland.
Plesiosaur
A dangerous, long-necked aquatic reptile.

Saltasaurus
A mid-sized sauropod dinosaur; the main focus of the episode.

A young female who serves as the main protagonist of the story.
Aucasaurus
A mid-sized carnivorous abelisaurid theropod, a family of which serves as the episode's main antagonists.

A young male who is the focal point of the Aucasaurus family.
Carcharodontosaur
A large carnivorous theropod.
Notosuchus
A fleet-footed terrestrial crocodylomorph.
Alvarezsaurus
A small fast-running birdlike theropod.
unidentified dragonfly
A large flying insect that recurrently appears in the early half of the episode.

Daspletosaurus torosus
A large tyrannosaurid theropod, a family of which serves as the main focus of the episode. 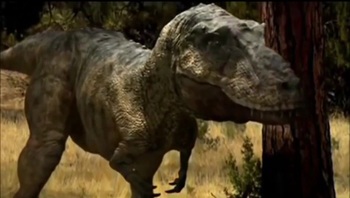 A juvenile male and the main character of the episode.

A large female and the leader of her family pack.

A pair of young females.
Maiasaura
A large herbivorous hadrosaur that travels in large herds and serves as the deuteragonist species of the story.

A male and female (respectively) pair of juveniles.
Einiosaurus procurvicornis 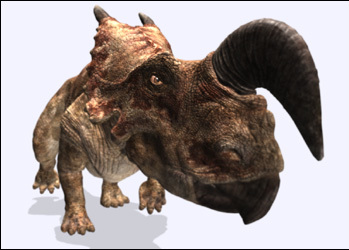