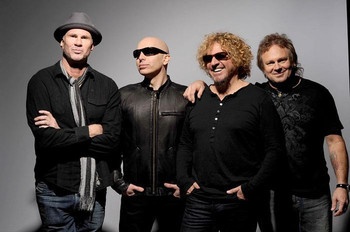 Chickenfoot is a hard rock band (technically a supergroup, but they don't feel that they are one) formed in 2008 by the legendary guitarist Joe Satriani, legendary vocalist Sammy Hagar, Hagar's Van Halen bandmate bassist Michael Anthony and Red Hot Chili Peppers' arguably legendary drummer Chad Smith. Originally formed by Hagar, Anthony and Smith for jam sessions. Once people started recognizing them and wanting them to tour and make an album, they called up Satriani and played a short set during one of Hagar's shows. The crowd reaction convinced them to stay together.

This band may show examples of the following tropes: