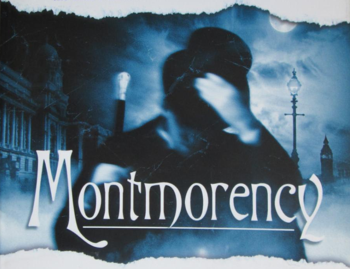 "Montmorency had the answer: He would become his own accomplice. His old self would become the servant to his new self."
— Montmorency
Advertisement:

Montmorency is a historical fiction series written by Eleanor Updale, set in Victorian England. When a thief who gets into a nasty accident with a glass rooftop while trying to flee from the police who caught him robbing a house, a kind doctor named Farcett performs surgery on him and saves his life. In return, the thief is forced to serve as a practice dummy during weekly sessions at an open house, facing prejudice and mockery from the other doctors. He then decides to assume a new personality when he escapes, to become a man of luxury while still committing thefts to support his new lifestyle. Eventually, he gets tired of having to rob all the time to support himself. The solution to his dilemma comes one day, when he saves a fat man named Fox Selwyn, who takes a liking to Montmorency immediately. Fox Selwyn reveals that he works for the government, finding threats to national security and Montmorency decides to join him using his knowledge as an expert thief. However, their new friendship is strained until Montmorency reveals his dark past to Fox Selwyn.

The series to date consists of: