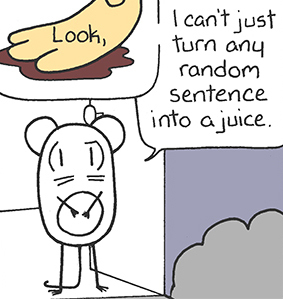 Oh dear lord, what have I gotten myself into?

is a very strange Stick-Figure Comic by Chris Combs. It consists mainly of non sequiturs, deriving much of its humour from such bizarre events as a man removing his heart and turning it into macaroni salad

, a woman whose silverware keeps getting stolen by ghosts

, and a salesman peddling hills as the latest new thing

. The comic is often completely incomprehensible, but the author claims that it always has a symbolic meaning. He's probably making it up. We hope.