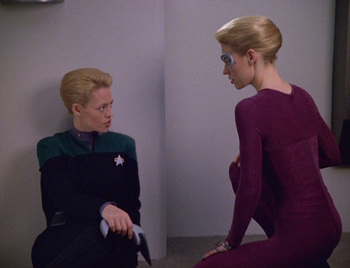 Seven of Nine is used by the crew of the future Federation starship Relativity to find out who is responsible for the sabotage of Voyager with a temporal weapon that would destroy the ship. After Seven is transported to the date when the saboteur is likely to appear on Voyager, she discovers that the saboteur himself is a future version of Captain Braxton who was stripped of his command and sent to rehabilitation after suffering from temporal psychosis. The crew of the Relativity put both the future and present versions of Braxton in confinement while Captain Janeway is used to stop the saboteur from planting the weapon before Seven interacts with a past version of Janeway (as well as herself) to contaminate the timeline.