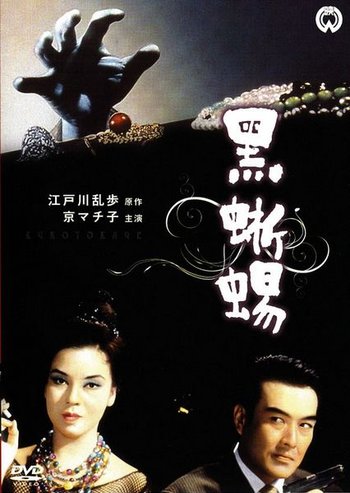 Black Lizard (Kurotokage) is a 1962 film from Japan directed by Umetsugu Inoue.

It opens with Iwase, a loudmouthed jeweler, bragging about his detective, one Akechi. He brags to his daughter Sanae and her companion Mrs. Midorikawa (Machiko Kyo) that Akechi is the finest detective in Japan, and that he is paying Akechi one million yen per month. He is paying Akechi so much because the notorious jewel thief, Black Lizard, has threatened to kidnap Sanae.

A drunk Iwase toddles off to bed one night in the fancy hotel in Osaka where the party is staying. After Sanae remarks that she doesn't particularly like the Arranged Marriage candidate her father found for her, friendly Mrs. Midorikawa offers to introduce her to a man she knows who is staying in the hotel. They go into the man's room—and Sanae is chloroformed.

It turns out that Mrs. Midorikawa is the criminal mastermind Black Lizard. She and her minion Amamiya (the man in the hotel room) stuff Sanae in the trunk. Akechi is on the ball, however, and his men manage to retrieve Sanae. The flamboyant Black Lizard, after having been exposed by Akechi, makes her escape, but not before promising that she will come for Sanae again.

Black Lizard is a weird, campy drama filled with odd mood lighting, random musical numbers, and bizarre moments that come off like a drug trip. It would be made again in even weirder fashion in 1968 with a man in drag playing Black Lizard.