Recap / The Mansions of the Gods 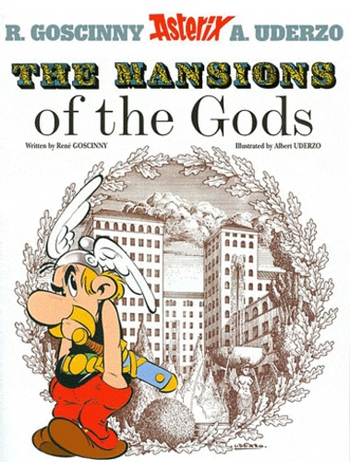 In the seventeenth Asterix book, Goscinny and Uderzo poke fun at both urban planning and the French labour movement. It received a CGI Animated Adaptation in 2014, The Mansions of the Gods.
Advertisement:

Caesar has decided that if the Gaulish village cannot be conquered, it will be absorbed into Roman society, and he has commissioned the architect Squareonthehypotenus to design a Roman city around the village, a city to be called "The Mansions of the Gods". He is sent to the fortified camp of Aquarium near the Gaulish village.

Squareonthehypotenus' project runs into difficulties from day one, as he has several close encounters with Asterix, Obelix, and Dogmatix as they hunt for boar while the architect is surveying the forests around the village. He decides the work must be done at night, and tells the international assortment of slaves he has rounded up (including Iberians, Lusitanians, Numidians, Goths, and Belgians) that they must be quiet so as not to disturb the Gauls in the village. They try to get out of working by singing loudly and claiming to be unable to work without doing so, but the architect finally snaps and orders an end to the singing. They only pull down a single tree before a group of Numidians imitate a rooster, and the construction crew members quickly disperse as the Gauls in the village begin to go about their daily business with hours to go before sunrise.

The following day, Asterix, Obelix, and Dogmatix find the fallen tree, and Obelix promptly replants it. The construction crew are ordered to remove the trees after pulling them down, so Getafix treats acorns with a potion that causes them to grow into oak trees instantaneously and has Asterix and Obelix replant the uprooted trees. After several days of this, the increasingly frayed Squareonthehypotenus vows to work the slaves to death if necessary; Asterix overhears this remark, and gives the slaves magic potion to fight back against their employers.

However, rather than overthrow their employers, the slaves simply demand better working conditions, fair pay, and freedom after the first building is completed in exchange for an end to the violence. The legionaries of Aquarium promptly go on strike when they realise they are now getting paid less than the slaves. The slaves' new working conditions do not stop Asterix and Obelix from replanting the trees as quickly as they are pulled down, so the leader of the slaves, the Numidian Flaturtha, finally implores the Gauls to let them finish building the first block of flats so that they can be freed. They agree, and construction is completed, to the disgust of the villagers; Geriatrix says he can't think what's stopping him from knocking the flats down.

The first wave of residents of the Mansions of the Gods arrives from Rome, including a couple who won a flat in the building in a competition (the husband only agreed to the prize when told his alternative was to be thrown to the lions). As construction on the local shops has not yet begun, the residents are invited to shop at the local Roman camps, but some of them decide instead to begin shopping at the Gaulish village, buying fish from Unhygienix and weapons (presented as antiques) from Fulliautomatix's forge. The village is soon overrun by Romans showing interest in buying anything that isn't nailed down, including Getafix's cauldron and Vitalstatistix's shield, and the villagers begin opening antique shops and fish stalls en masse to get a share of the money now flowing into the village.

Asterix, Obelix, and Getafix decide to put an end to the madness. After establishing that there are no vacancies in the Mansions of the Gods, Asterix has Obelix pretend to attack the couple who won their flat in a competition in a quasi-feral rage. The husband finally snaps and he and his wife move out of the block of flats; the newly vacant flat is immediately rented by Asterix and Obelix for Cacofonix, the bard. After just one night of listening to Cacofonix singing, every other resident of the building moves out in disgust.

His plans collapsing around his ears, the furious Squareonthehypotenus invites the legionaries at Aquarium to move into the building until permanent new tenants can be found, but he first forcibly evicts Cacofonix, who returns to the village to find the fishmongers and antiques salesmen all going out of business. However, just as the villagers prepare to castigate the bard for causing the collapse of their trade with the Romans, Asterix draws their attention instead to the grave "insult" of the Romans kicking one of their fellow villagers out of his home. They load up on magic potion and descend on the block of flats and its residents, bashing in the legionaries and reducing the building to rubble.

The battered Squareonthehypotenus announces his plans to go to Egypt and build pyramids, while Asterix and Obelix replant the trees among the ruins of the Mansions of the Gods. The book ends, as usual, with a celebratory banquet, and even Cacofonix is allowed to take part in honour of his role in driving out the Romans.