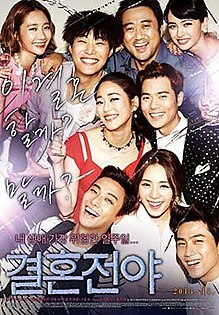 Marriage Blue (결혼전야, Gyeolhonjeonya) is a 2013 romantic comedy film from South Korea. It tells the interlinked stories of four couples who are engaged to be married, and their anxieties and difficulties as the wedding approaches.