Literature / Diary of a Madman 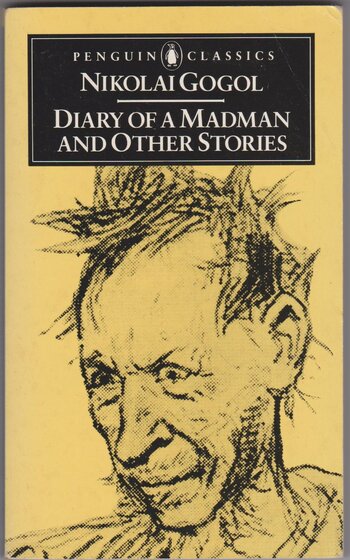 "Diary of a Madman" is short story by Russian author Nikolai Gogol. It consists of entries from a madman, the madman in this case being Poprishchin, a 40 year old titular counsellor who serves as an assistant to the director of his division, a job consisting mostly of sharpening quills. He entertains delusions of self-importance, holding great pride in being officially a nobleman. He has fallen in love with the director's daughter, and desires to be noticed by her.

One day, while walking to work, he encounters the director's carriage, carrying his daughter to the store. While observing, he hears a voice, which he discovers to be that of the dogs. The rest of the story details his descent into madness, told through the entries of his diary.

A planned Animated Adaptation in the 1970s never materialised, but the narration by Kenneth Williams was later turned into a radio play by The BBC.

Absolutely no relation to the 1885 Guy de Maupassant short story The Diary of a Madman, the 1963 Vincent Price horror film, or the My Little Pony: Friendship Is Magic fanfic Diaries of a Madman.