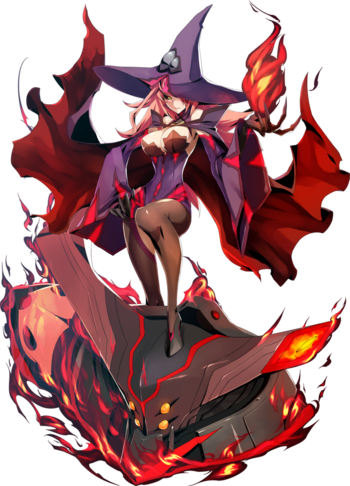 Don't screw with this witch.
Click to see her outfit in Dark War. 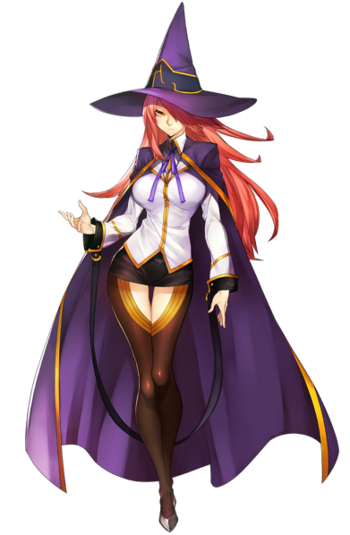 "Just so you know...there is no such thing as the 'truth' in this world. Just illusions..."

Voiced by: Ayumi Fujimura (Japanese, Chronophantasma-Cross Tag Battle (Season 1); relinquished), Rie Tanaka (Japanese, Cross Tag Battle (Season 2); current) / Amanda Céline Miller (English, Chronophantasma and Cross Tag Battle)
Real name Konoe A. Mercury. Another one of the Six Heroes, "Nine" (as she prefers to be called) is the one who taught humans how to use magic. She's Jubei's wife and Kokonoe's mother. Her sister Celica ran the orphanage where Ragna, Jin, and Saya lived. Additionally, she used human transmutation to create the Nox Nyctores. She died at the hands of Terumi after the Dark War. This was his revenge for being strong-armed into working with the other heroes and was also done to prevent Nine from releasing the souls that powered his Nox Nyctores. Sometime after this event, she was reanimated as his puppet, the mysterious Phantom. After the events of Chronophantasma, Nine ends up freed from her enslavement by the Imperator, and is now putting into motion a plan of her own. She becomes a playable character in Central Fiction, serving as the boss of Act I of the game's Arcade Mode story, titled "Phantom of Labyrinth".
Advertisement:
Nine's "ability" is called The Abyss Diver, but is not a Drive per se but rather magic attacks, which depend upon a stock system similar to Platinum. Certain moves will cause one of three kinds of ribbon-esque rings to appear around Nine, each one color-coded to a specific element (red = fire, blue = water, green = wind). She can only stock up to three elements at a time, and by using each combination she can use a wide variety of special moves, giving her the largest move-list of the entire roster. Her Overdrive is called Burning Red, and makes it so that all of her moves build elemental rings even when whiffed, in addition to adding automatic elemental buff whenever she uses a spell.
Her Exceed Accel Scarlet Vein has her knock the foe upward, then commands a demon named Hi-no-Kagutsuchi to crush the foe between its fists. Her Astral, Colorless Void, involves her trapping the opponent in a raised crevice from the earth as it transforms into Hi-no-Kagutsuchi which swallows them whole and envelops them in a circle of fire. She then rises up, creates a giant portal with a pentagram symbol, and rains dozens of meteors upon the opponent.
Advertisement:
For info about her younger self, Me, see XBlaze Lost: Memories.
open/close all folders
# - C
D - H
I - R
S - Y