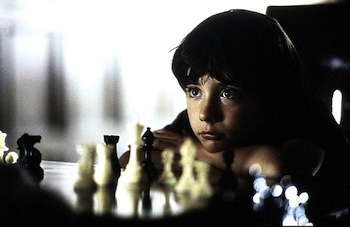 Searching for Bobby Fischer is a 1993 film about chess.

Fred Waitzkin (Joe Mantegna) discovers that his young son Josh (Max Pomeranc) is a chess prodigy. The Waitzkins send Josh to a special school and start chess lessons for Josh despite the misgivings of Josh's mother (Joan Allen), who is worried about stunting his social development. Ben Kingsley plays Josh's strict chess tutor Bruce Pandolfini, and Laurence Fishburne is a chess hustler in the park that Josh learns a more aggressive style of chess from. Josh must reconcile the lessons from his two teachers, retain his humanity instead of becoming a chess robot, and play for the youth championship against Jonathan Poe, a merciless opponent.