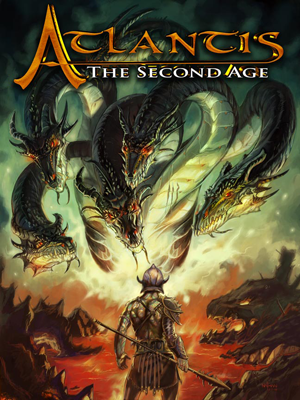 Here there be monsters.
Advertisement:

Atlantis: The Second Age is a Sword and Sorcery roleplaying game currently published by Khepera Publishing. Drawing heavily on the works of Clark Ashton Smith, Robert E. Howard, Fritz Leiber, and Michael Moorcock, it is set in the world of the ancient continents Atlantis, Lemuria, and Mu. Five centuries after the Great Cataclysm took a heavy toll on the empire of the Atlanteans, the way is paved for humanity's rise as the new dominant race of Earth.

Unlike most roleplaying games, newly created Heroes are already highly competent and outstanding people, whose skills and abilities rise only slightly during the course of the game. Instead of gaining XP from defeating enemies to improve their power, characters in Atlantis increase their Renown by the deeds they perform, of which the slaying of legendary monsters is only one of many types. A very strong and central concept of the game is the focus on fate and destiny. As characters rise in fame by increasing their Renown, they gain the attention of the gods and fate itself is on their side, allowing them to perform incredible deeds of strength and valor through the use of Hero Points. Hero Points are a central mechanic of the game and allow players to add bonuses to their dice rolls, such as skill and attribute checks, increase the damage they inflict on wounded enemies, shrug off injuries, and avoid succumbing to their wounds. While the amount of Hero Point every character has is limited, there are many way to regain spend points during the ongoing adventure, such as carousing to raise their spirits, sacrificing to the gods, activating a disadvantage, or tempting fate to rely on sheer inhuman luck. However, even heroes favored by the gods are at risk of rising too high and succumbing to hybris, and every character in Atlantis has a dark fate hanging over them like a Sword of Damocles, waiting to strike them down should they fail to achieve their rightful destiny.