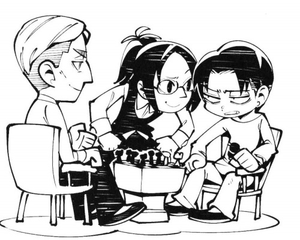 Spoof on Titan, aka Sungeki no Kyojin, is a Yonkoma parody of Attack on Titan made by hounori. Primarily concerned with comedy, Spoof happily exaggerates character traits and references memes to provide a droll look at the world of Attack on Titan.