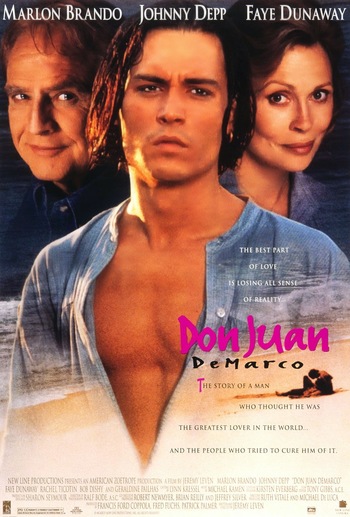 "I must report that the last patient I ever treated- the great lover, Don Juan DeMarco- suffered from a romanticism which was completely incurable. And, even worse, contagious."
— Dr. Jack Mickler
Advertisement:

The eponymous character, 21-year-old John R. DeMarco (Johnny Depp) is a charming young man who customarily dresses in a long cape and domino mask, and introduces himself as the legendary seducer Don Juan. Following a thwarted suicide attempt (prompted by a rejection from "the only (woman) who has ever mattered"), he's sent to a mental institution for treatment. A sympathetic psychiatrist, Dr. Jack Mickler (Marlon Brando) takes his case, and is given ten days to cure John of his delusions before his own retirement. But their analytical sessions have an unexpected effect; John's over-the-top romanticism and appealing (if wildly improbable) tales of sexual conquest affect his would-be healer more than himself. Dr. Mickler is inspired to spice up his marriage to still-beautiful Marilyn (Faye Dunaway), whilst developing serious doubts whether John/ Don Juan should be 'cured' at all. "(I need) to get into this world that he’s in, and it’s a wonderful world."