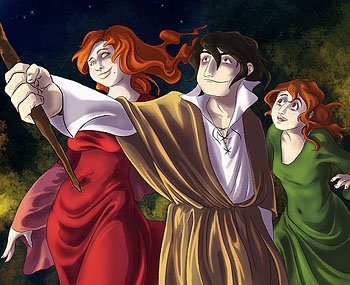 From left to right: Beatrice, Herbert and Nancy.

is a comic (currently on hiatus) about a laughably lazy and incompetent demon and how he still manages to fit in a medieval village, thanks to a hitherto unknown talent for coming across as a merely wish-washy, but well-intentioned, human.

Herbert - his alias while in the human world - had, along with most other demons, the mission of corrupting as many humans as possible. His chosen method was to deflower virgins. Although normally a fine pursuit for a demon, Herbert's error lay in the fact that he used his powers to compel them into having sex with with him, rather than seducing them — making them rape victims rather than sinners. As a result (much to his consternation), he hasn't sent any soul to hell in several thousand years.

His superiors have decided the only suitable punishment for him was oblivion, and thus Herbert found himself using gray cells he didn't even know he had in order to escape his coworkers - until he accidentally crossed the boundaries of a village protected by a holy tree. He managed to survive the entry, somehow, and was taken in by Nancy, the local innkeeper's daughter. And since no other demon seems willing to walk in after him, he decided to hang around for as long as possible, even though he's rendered completely powerless while in the Holy Birch Village.

This Web-comic provides examples of: