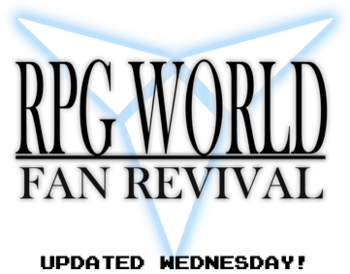 is a fan continuation of the long-abandoned RPG World by Ian Jones-Quartey. The website hosts links to the full original comic, plus new fan content with writing by DoomDragon6 and artwork by AtariBetch. The original RPG World takes place inside a Playstation Japanese RPG and pokes fun at all the tropes of RPG gaming while maintaining compelling story and characters.
Advertisement:

, before it was abandoned. It starts out with Jim, the real-life player of RPG World, continuing the events 7 years later, then continues the in-game story where it left off. The revival began on June 19th, 2016 though the initial pages were written in 2013, hence the "7 years later" as opposed to "10 years later". The revival went into an official hiatus on November 17, 2016 after the author had trouble keeping updates, but returned over a year later on July 31, 2018, and has maintained a steady update schedule since then.

The revival has enjoyed mild success, but the author has lamented the difficulty in finding older readers of the comic, due to the nature of the internet back in its original success and lack of current social media popularity.

In addition to the characters listed on the RPG World TV Tropes page, RPG World: Fan Revival has introduced:

In the "real world":

In the game world: