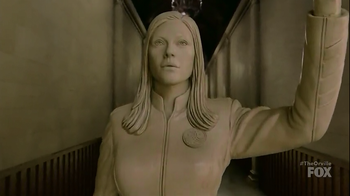 Kelly learns that it's tough to be a God.
When the crew discover a multi-dimensional planet on an accelerated time frame, Kelly inadvertently becomes a deity to them. And gets to experience the ups and downs of acts carried out in her name.