Recap / Big Finish Doctor Who 142 The Demons Of Red Lodge 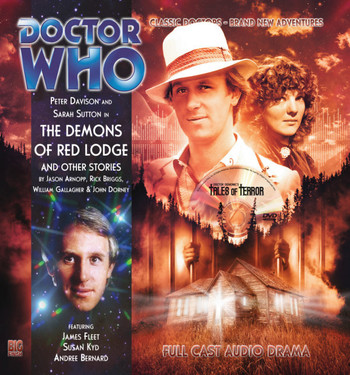 An anthology of four tales featuring the Fifth Doctor and Nyssa.

The Demons of Red Lodge

The Doctor and Nyssa wake up in a little woodshed with no idea where they are—or why they're both so terrified they can hardly control themselves. They don't know where they are, where the TARDIS is, or why the old lady who takes them in seems dead set against the Doctor seeing her dying sister ...

The Doctor takes Nyssa to a repository of music from all throughout history to let her listen to a composition from Traken. But when she goes in to listen, they find that the music has been destroyed and in its place is a noise that can physically tear a person apart. It can't be allowed to hang around the musical archive, wiping out music from all over history, so the Doctor and Nyssa go back to its source to try and stop it. Conveniently, its source is 1960s England ...

Specifically: jail time on a human colony called Folly, and it's the Doctor who's stuck doing it. He's been given two years for apparently threatening to blow up the prison. The prison will explode, he says, but it's not his doing, and all he wants is for someone to believe him and evacuate the prisoners before it's too late.

Meanwhile, Nyssa's attempts to get herself arrested and join him in jail don't go nearly so well. She can't get in, the Doctor can't get out, and the prison governor isn't nearly as aboveboard as she wants the colonists to believe.

The Doctor and Nyssa do a DVD Commentary! But the original DVD isn't perfectly mundane; not with actors, directors and writers mysteriously dying, footage disappearing, and the TARDIS team showing up just in time to snag themselves co-starring roles. They're not doing the commentary just because they can, either. They've come back, twenty-five years after the movie was made, for a reason.