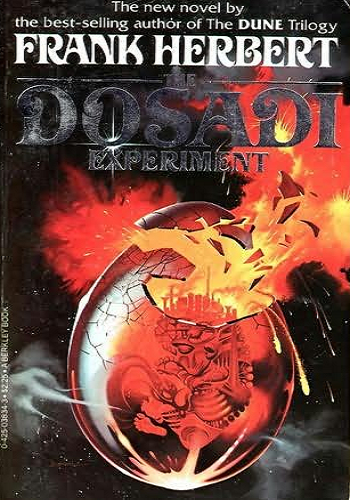 The Dosadi Experiment is a 1977 Science Fiction novel by Frank Herbert; part of his ConSentiency series (less famous than his Dune series). The protagonist is Jorj X. McKie, who belongs to the Bureau of Sabotage, an agency intended to moderate the totalitarian tendencies of the ConSentiency, the galactic government. Other galactic players include the Caleban, extradimensional beings who provide teleportation services, and the Gowachin, frog-like humanoids who specialize in law.
Advertisement:

McKie learns from a friendly Caleban that they have helped the Gowachin with an experiment that has lasted several generations: they have "accidentally" mistransported various humans and Gowachins to a planet named Dosadi. A "God Wall" keeps them in and everyone else out. Because the planet has poisons everywhere, the millions of inhabitants live in one valley. Their artificial society, already under immense pressure, will explode unless something changes.

With an assumed identity, McKie teleports to Dosadi. The ruler, a Gowachim named Broey, has concentrated his forces to defend against an expected uprising. McKie tracks down the "rebel" leader and finds Keila Jedrik, a human woman and civil servant who has orchestrated civil unrest and rebellion. As in several other Herbert works, a principal character undergoes an evolutionary gestalt.