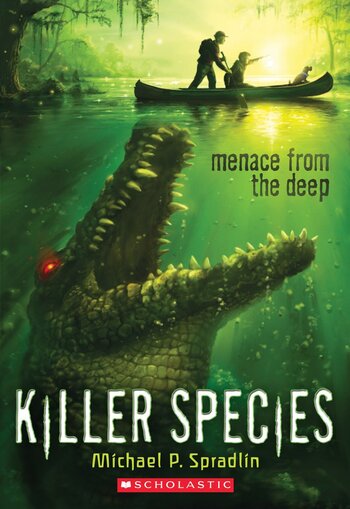 Killer Species is a children's series written by Michael P. Spradlin in The New '10s. It tells the story of Emmet Doyle, son of Dr. Benton Doyle, a wildlife biologist who's been summoned to the Everglades by park superintendent Dr. Rosalita Geaux and is bringing a reluctant Emmet along with him. There, it's revealed that he's been called in to study a strange new creature that's been discovered in the wetlands, which is soon discovered to be a genetically-engineered apex predator that was created to hunt and destroy other invasive species that are harming the local ecosystem. However, these new predators are just as big a threat as the animals they hunt, and so Emmet, his father and his new friends must work to remove them and find and capture their creator, the mysterious Dr. Catalyst.
Advertisement:

The series consists of four books: