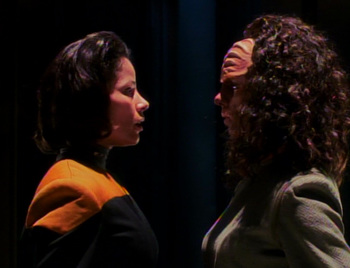 Human B'Elanna and Klingon B'Elanna.
The Vidiians capture an Away Team and use their technology to create two B'elanna Torres' — one that is completely human, and one that is completely Klingon. Their Chief Surgeon, Sulan, believes that a pure Klingon may be completely resistant to the Phage disease. Eventually she and her fully human counterpart escape captivity to help rescue the others, though they are unable to save a Red Shirt as his face ended up being grafted onto Sulan's.