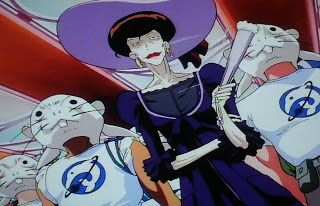 Twinkle Maria Murdock and her sons, who are costumed as Ganymede Sea Rats.

The episode begins with Faye's ship drifting out in space, out of fuel. Faye, apparently now penniless after making off with the bribe money from last episode, is finishing off the last of her rations. A ship passes by which she tries to hail it but it just ignores her to her dismay. However, her scanner soon picks up another signal, this one from a broken and destroyed ship.

Meanwhile on a satellite and one of the restaurants within, we find Spike and Jet tailing another bounty who's had plastic surgery to hide himself. Unbeknownst to them a group of people are eating at a nearby table, talking about how there was a spy in their group and they had stopped him. However the leader, whom the others call "Mom", is displeased that this happened in the first place and demands that one of them be punished. The first one to speak, Harrison, finds himself the unlucky candidate. However this is interrupted when Spike and Jet's bounty yells out to the waiter for his Sea Rat Saute, which visibly angers "Mom". Jet finishes ID-ing their prep, named Morgan, and Spike and he are set to catch him when Mom and her gang confront Morgan about his choice of food before brandishing machine guns and opening fire. Killing not only him and his entourage, but everyone in the restaurant save for Spike and Jet, who managed to get under their table in time. Jet however finds something familiar about "Mom". After everyone is dead the group leave a holographic message stating that they are the Space Warriors, a so-called "eco friendly" group that protects endangered species. This triggers Jet's memory that "Mom" has a bounty on her. As she and her cohorts are set to leave, Spike ambushes her and holds her at gunpoint to keep her gang at bay. Jet examines Morgan and finds he's useless to them now though Spike is more then happy to trade up to the higher bounty on "Mom". Oddly, she calmly gives herself up without a struggle despite the worries of her subordinates.

Back with Faye, who dons a spacesuit and goes over to the wrecked ship. The dying pilot gives her a case and tells her to take it the I.S.S.P, emphasizing that she must not open it before he passes away, much to Faye's confusion.

Meanwhile, Jet checks up on Mom's background, revealing her real name to be "Twinkle" Maria Murdock, who is the leader of the once peaceful Space Warriors before she took over and turned those who didn't leave into violent eco-terrorists. Jet tries call her in to the Ganymede police, only to discover that the bounty has been cancelled. Back with Faye, despite the warning from the dying pilot, she opens the case anyway and finds a vial with a strange liquid inside held by a rubber like container. Elsewhere, the Space Warriors are talking with a minister of the planet Ganymede who had canceled the bounty as requested to keep them from setting "the plan" into motion; however, they threaten that "the plan" will still be set into motion if their "mother" is not returned to them very soon.

Faye expresses interest in the odd container before her ship picks up another signal. On the Bebop, Spike and Jet are trying to figure out what's going on with the canceled bounty when they get a hail and find it's none other than Faye. They don't respond back as she pleads for their help, letting her go on unaware of who they are till she sees the Bebop nearing her ship. Upon picking her up, they handcuff her once again and raid her ship for anything valuable, finding out that she wasted the money she looted from them gambling. Jet continues on with his investigation, deciding to call one of his contacts. Spike, meanwhile, finds the vial, much to Twinkle's shock. On Ganymede, the minister speaks with the president of the planet about trying to find a virus. Just as he ends the call, he's informed they found the bounty hunters who took Twinkle. Back on the Bebop, Jet contacts an old friend named Bob about the situation. He feigns no knowledge on whats going on, but when Jet threatens to blackmail him for swiping some "illegal eyedrops" while on the job, Bob caves and reveals the truth; the Space Warriors have developed a virus which they call "Monkey Business" that will revert any human it comes into contact with into monkeys. They've threaten to unleash it on Ganymede if their demands are not met to save the planet's sea rats.

As they're talking, Spike tries to free the vial from its container but is having no luck. Bob continues that they had a mole in the Space Warriors group but they lost contact and the planet's government sees no other options but to give in to their demands. Jet tries to persuade him that they have the leader, but Bob counters it's orders from the top so there's nothing they can do. Spike finally manages to free the vial with a gunshot, thankfully not breaking it. But Jet comes to inform him that they're letting Twinkle go, who laughs in triumph. They meet up with the Space Warriors and reluctantly release Twinkle to them. The Minister of Ganymede and his team observe this in hopes of locating the virus. However they soon get a message from Twinkle who wishes to know about their demands. The minister informs her that they've passed a bill to limit the harvesting of the sea rats. However, Twinkle did not want to simply limit the harvesting, she wanted it stopped entirely - as such, they put their plan into motion.

The I.S.S.P continue tracking the Space Warrior's ship through an area of space debris. The ship releases bombs that explode into harmless Eco-friendly messages. However the ship is a decoy and the real one slips by unnoticed. Meanwhile Spike and Jet are bummed about losing their bounty when Bob frantically calls to inform them of a broadcast Twinkle's doing live. She gives a speech how humanity has forsaken nature and her virus seeks to return them to it. Just as the I.S.S.P cops close in on the decoy ship, it explodes, killing them. Spike manages to track Twinkle's frequency to the hyperspace gate just as Twinkle fires a missile loaded with the virus. The Ganymede government re-instate Twinkle's bounty, much to Spike and Jet's joy, but must stop the virus first lest they want to try collecting the bounty from a planet full of monkeys. Spike heads off into the gate and tries to blast the bomb. However, it splits, revealing three missiles. Spike manages to hit two, but misses the third.

He calls to Jet to get it but the Bebop's weapons are offline and the Swordfish's cannon won't recharge in time. It's then that Faye reveals herself, having broken free of her cuffs and refueled her ship; she offers to get rid of it for a cut of the bounty (her cut higher of course). Spike and Jet have no choice but to accept her offer and allow her to go into the gate. However just as she's locking onto the missile it splits again, revealing dozens upon dozens of warheads. All seems lost until Bob calls to inform the crew that the Ganymede government will close the gate to stop the missiles. Spike and Faye race back to the entrance and make it out just as the gate closes. The missiles still seem to come through, but Jet informs the panicked Faye that it's only in the gate's dimension, not their own, so they're fine. Someone who isn't is Twinkle and her group, as their plans are now thwarted. As they stop their ship to keep from crashing into the gate, a vial of the virus slips out of Twinkle's pocket - alongside the reveal that it's the same one Spike had freed, and that he had slipped into her pocket during her transfer back to the Space Warriors. Twinkle can only panic as the vial hits the front of the cockpit and shatters, releasing the virus.

Back on the Bebop, Spike and Jet are once again bummed at losing the bounty but Faye, now having invited herself aboard the ship, tries to cheer them up before heading off for a shower. Spike asks Jet if this is really happening which Jet comments "he doesn't know and has no opinion". When Spike brings up the busted shower, Jet is still unresponsive so Spike goes to tell Faye himself. Jet tries to stop him but gunshots ring out, so he just lets it be.