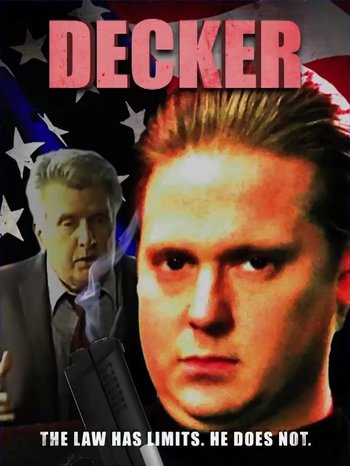 Decker is a comedy-action web series and TV show which began in 2014 as a spinoff/tie-in to the web series On Cinema with many of the stars and recurring guests of that show having roles in Decker. The series follows CIA agent Jack Decker, played by Tim Heidecker, who fights agaisnt terrorism and fights for the American way, generally because US President Davidson, played by Joe Estevez, usually lacks the courage to do so. Tim's On Cinema co-star Gregg Turkington also appears in the series as Special Agent Jonathan Kington who aids Decker by cracking codes. Kington is also an avid movie buff, just like Gregg's persona in On Cinema. It is a spoof of action films and has deliberately bad acting, writing and special effects.

Its first three seasons, Classified, Port of Call: Hawaii and Decker vs. Dracula were released on the [adult swim] website and YouTube while season four, Decker: Unclassified aired on the Adult Swim TV network as well as season 5, Decker: Unsealed and season 6, Decker: Mindwipe. The series is frequently mentioned in On Cinema, where Tim and Gregg serve as regulars, and is often a source of tension on that show.