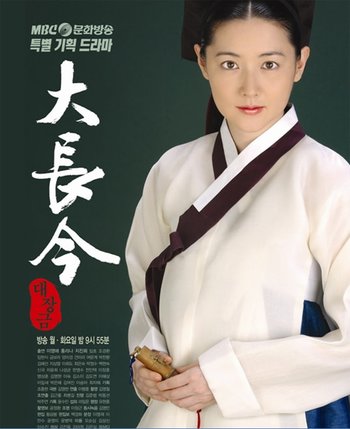 Dae Jang Geum (Hangul: 대장금; Hanja: 大長今; RR: Dae Jang-geum; MR: Tae Chang-gǔm; literally The Great Jang Geum; also known as Jewel in the Palace in some countries) is a 2003 epic South Korean television series directed by Lee Byung Hoon and produced by MBC. Starring Lee Young Ae, it tells the tale of an orphaned kitchen cook who went on to become the king's first female physician. In a time when women held little influence in society, young apprentice cook Jang Geum strives to learn the secrets of Korean cooking and medicine in order to cure the king of his various ailments. Produced for $15 million, the show received as much as 57% of viewers in South Korea and has pulled in $40 million worldwide since it first aired in 2003.

It is based on the true story of Jang-geum, the first female royal physician of the Joseon dynasty. The main themes are her perseverance and the portrayal of traditional Korean culture, including Korean royal court cuisine and traditional medicine.