Film / The Tree of Wooden Clogs 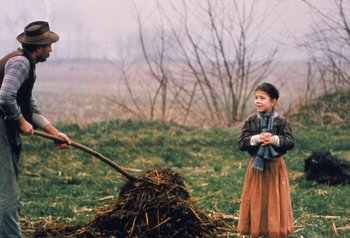 The Tree Of Wooden Clogs is a 1978 film from Italy, directed by Ermanno Olmi. Its original title is L'Albero degli zoccoli.

It is a year in the life of four peasant families in rural Lombardy at the end of the 19th century. They live in dire poverty in a communal farmhouse on the property of an uncaring landlord. They till the landlord's soil and in return have to give him 2/3 of the crops they raise. The families themselves have their own problems. Batisti, one of the farmhands, has an exceptionally bright little boy named Minek. The local priest urges Batisti to send the boy to school, and Batisti reluctantly does, even though poor Minek will have to walk 12 kilometers round trip to school every single day. A woman, the Widow Runk, wonders how she can support her six children after the recent death of her husband. Anselmo, a young man, courts the pretty Maddalena. Time passes and life goes on.

Filmed on location in Lombardy with a cast of locals who spoke the local Bergamo dialect, one that isn't easy for other Italians to understand.