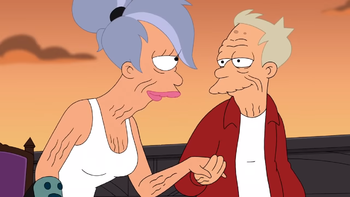 And they lived happily ever after. And then they got to do it again!
Advertisement:

When Leela is almost killed after being launched through the glass dome over Luna Park, the site of the Planet Express crew's first delivery together, Fry is so shaken by the thought of life without her that, after over 13 years of being in an on-again, off-again relationship, he finally decides to propose to her. The next day, Professor Farnsworth shows off his latest invention - the Time Button, which sends the user back in time ten seconds. He has also built a time shelter that renders its occupants immune to the effects of the Button, and when Leela asks about using it repeatedly, he says it has a ten-second charge time.

This gives Fry an idea; he steals the Time Button and, after going to a jeweller's with Bender and using the Time Button to steal dozens of diamonds for the engagement ring, he proposes to Leela. He tells her that if her answer is yes, she should meet him on top of the Vampire State Building at 6:30pm the next day; if she doesn't come, he'll know her answer is no. Anticipating a "yes" answer, Fry plans to use the Time Button to make the sunset last indefinitely, but when his watch reads 7:02 and Leela still hasn't arrived, he jumps off the ledge in despair - only to see Leela approaching the building, as his watch is running over half an hour fast thanks to his use of the Time Button. It doesn't occur to him until just before he hits the ground to use the Time Button to save himself... whereupon he discovers that he's been falling for more than ten seconds and is forced to re-live his fall over and over, with no apparent way out.

However, the Professor is in the time shelter and has noticed the clocks repeatedly jumping back ten seconds, so he summons Amy, Bender, Hermes, and Zoidberg into the shelter. Bender admits that Fry stole the button, and the quintet carry the shelter to the Vampire State Building. Their arrival startles Fry into dropping the Time Button, causing him to splatter into a puddle of blood and guts. Leela realises she can save him with the Time Button, but in doing so, she inadvertently shreds the Professor across the space-time continuum. After Fry explains himself, Bender has an idea. He runs out of the time shelter, and Amy and Hermes ram Zoidberg into him to deploy his air bag, allowing Fry to land safely. But as he bounces off the air bag, he lands on the Time Button, smashing it and freezing him and Leela in time.

Fry and Leela decide to make the most of things, going through with their wedding in front of their family and friends (who are now effectively statues) and travelling the Earth together over several decades. Every now and again, they notice a glimmer shooting past them - until, as they return to the Vampire State Building to take in the sunset Fry wanted to make last indefinitely, the glimmer solidifies to reveal the Professor, who explains that he was rotated into an orthogonal time, and has only just now caught up with them. It takes him mere seconds to repair the Time Button, but he re-configures it to send himself, Fry, and Leela back to before he even conceived the Button. Fry and Leela realise this means they have their whole life together to live over again, and they embrace as the Professor hits the Button, sending them back in time.

Professor: Okay. I've modded the device to release a single huge antichroniton blast. It should rip us out of stasis back to the instant before I conceived of the Time Button.
Fry: You mean we'll all get to live our lives over again?
Professor: Oh, my, yes. Even that nasty robot, What's-His-Name. Of course, we won't remember anything that's happened.
Fry: What do you say? Wanna go around again?
Leela: I do.