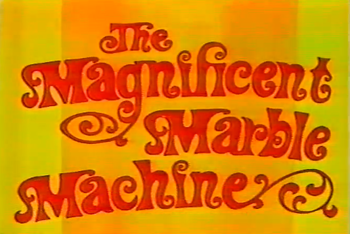 Long ago, back when Pong was pretty much the only Video Game on the market, pinball games were enjoying a surge in popularity. Also popular at the time were Game Shows, so Merrill Heatter and Bob Quigley decided to fuse the two. The result was The Magnificent Marble Machine, which debuted July 7, 1975 on NBC. The host was Art James, fresh off the flopped Blank Check.

Two contestants, one a returning champion, competed with a celebrity partner to answer general-knowledge questions. The questions were displayed on an electronic ticker, with a series of dots on the bottom and a clue scrolling in on the top (i.e., "They hang lampshades"/•• ••••••; the answer is TV Tropes). The contestants and celebrities took turns for each question, and if nobody buzzed in once the clue was fully exposed, random letters of the answer would appear until someone did. The first team to score five points won the game and played the titular Machine.

The Machine, sitting in the center of the set, was 20 feet high and 12 feet long. Each member of the team used a button that controlled two flippers, and attempted to keep the two balls in play for up to 60 seconds each. 500 points were scored for hitting bumpers, while noisemakers and lights awarded 200 points per hit. The main focus was the Thumper Bumpers, seven large numbered bumpers on the table which awarded prizes if hit (displayed below the score on the top half of the Machine); the ones marked "2" and "3" each represented half of the grand prize, such as a car or trip, and both had to be hit for that prize to be awarded. (Later in the run, a bonus prize was added for hitting all seven Thumper Bumpers at least once.)

Once the two minutes expired, or the balls were lost through one of the two "out holes" (one below the main flippers as on a standard pinball table, the other behind Thumper Bumper #6), the game ended. If the team had managed to score at least 15,000 points (minus 1,000 each time the goal wasn't met), they played a Gold Money Ball for another 60 seconds and won $200 each time it hit a noisemaker or bumper. (Later on, the goal began at 13,000 points and the Money Ball awarded $500 for each bumper hit.)

Marble debuted in a time swap with the neutered Jackpot, going up against CBS' hit soap The Young and the Restless and ABC's Showoffs. It moved to 12:30 PM on December 1, and not only went up against CBS' Search for Tomorrow and ABC's All My Children but shrank from 30 to 25 minutes to accommodate NBC's 12:55 newscast. After a two-week absence in January 1976 (replaced by NBC testing a relationship show called Take My Advice), the show returned at Noon with an all-celeb format, a move which failed against ABC's Let's Make a Deal. Marble ended first-run episodes on March 12, but aired repeats through June 11 to give its replacement (The Fun Factory) some more time to get itself ready to debut.

Surprisingly, the show reappeared toward the end of The China Syndrome (1979) as the "regular programming" interrupted by KXLA in favor of the news report inside the plant note (which in turn suggests that either the film takes place in 1975-76 or KXLA aired repeats of Marble later in the decade). The clips are of Joan Rivers playing a normal ball on the Machine sometime before the end of the Money Ball Marathon (see below), though the music, sounds, and Art's commentary were all dubbed over with generic music and sounds.