Ripped from the Phone Book 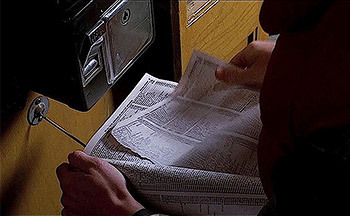 Whenever an investigative character looks up information in a telephone directory and find the one piece of information they've been looking for, they'll rip out the entire page from the phone book. A lot of the time, the directory was one of those found next to a public telephone, which mean that our Sam Spade or Intrepid Reporter has just ruined the chances of anybody else looking up anybody whose name begins with B. Perhaps it helps to show how rushed and straight to the point they are but you'd think people in those professions would have gotten used to carrying around a pen and notepad.

This can be Truth in Television, although it might just be Life Imitates Art. In either case, it can get very frustrating after the Oh-don't-know-how-many-times one has gone to look up something in the phone book at a public pay phone only to discover several pages missing, including the one you needed. (Of course, this is getting rarer as phone books at public telephones, and indeed public telephones themselves, are increasingly hard to come by. Factor in Technology Marches On, where people can simply type the number into their cell phone, or take a photo of the page they need with a camera phone, and it'll likely be a dead horse before long.)

Not to be confused with Ripped from the Headlines.