Characters from Final Fantasy Type-0. Some spoilers are unmarked - read at your own risk. 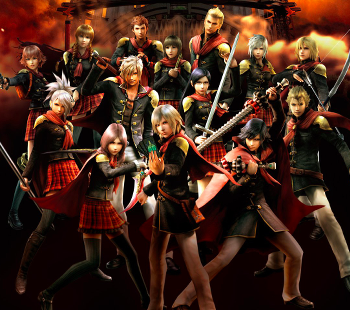 A special class within the Vermilion Peristylium assembled as a preemptive strike force in case the other three nations of Orience break the Pax Codex and set their sights upon Rubrum. Contrary to the rest of the students of the Academy, Class Zero is able to use magic in Crystal Jammer fields, nullifying the greatest weapon of Milites against the nation and making them a deciding factor in the war to defend Orience.
Advertisement:
Machina Kunagiri 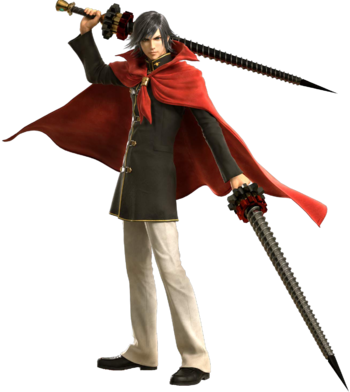 A transferee to Class Zero from Class Second (evidenced by his old navy-blue cape) and Rem's childhood friend, as well as her fellow lead character. He's the younger brother of Izana, the messenger who was killed in action while delivering orders to Class Zero. He has forgotten his brother initially but comes to remember him, and blames Class Zero for his death. 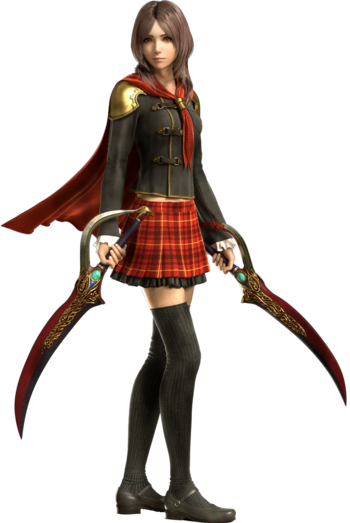 The other lead character together with her childhood friend Machina and, like him, a transferee, in her case from Class Seventh (indicated by her old pink cape). Conflicted with Machina's headfirst jump to self-destruction and her loyalty to her nation, Rem is also stricken with some sort of illness that is sapping her strength.

A boy who leads Class Zero, He is calm and withdrawn but with an underlying childlike passion. While most others in Orience completely forget the dead, Ace is at least able to remember them enough to mourn.

A plucky girl who uses her flute as a weapon. The youngest member of Class Zero, she is kind-hearted and good-natured even if she can be a bit stubborn.

A blond boy who serves as the Class's archer. He's calm and well-mannered, but can be chatty.

A perky girl who carries a backpack at all times and wields an antique pistol said to still pack a punch. She has a confident and direct personality.

A strange girl with an equally strange mental process, who uses an oddly shaped mace. Her unusual personality and unpredictable actions tend to cause others to stay away from her.

A tomboyish girl who wields a scythe in battle. She is not skilled with words, but has good judgment. 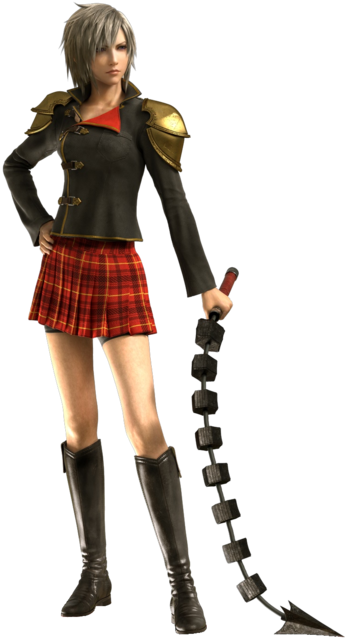 A lady who wields a chain-whip. While her expressions are somewhat cold, befitting the oldest member of Class Zero, she is kind and good-natured. 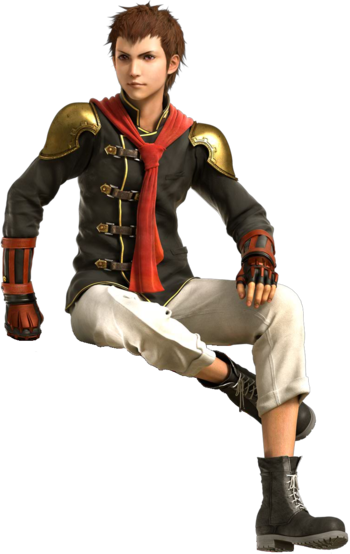 A boy who fights with punches and kicks. He's not a fan of weapons which take people's lives, so he chooses to fight hand-to-hand. 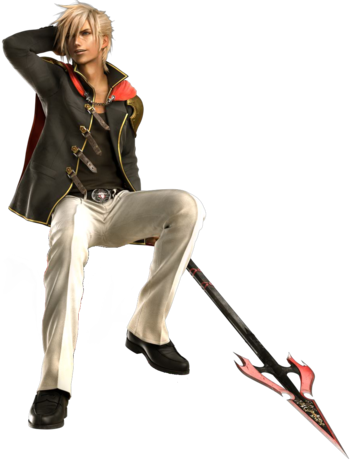 A brash guy who wields a lance. He has a skill set like the Dragoon job class from Final Fantasy games past. 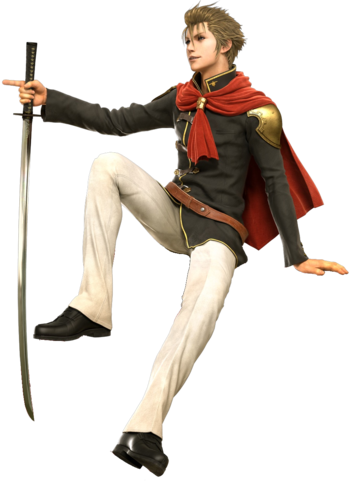 A katana-wielder who always wears a smile and is able to make wise-cracks easily. In dangerous surroundings he encourages his peers to take it easy.

Representative of Class Zero who wields a longsword. She opposes injustice in all forms.

A young man who wields a pair of revolvers and possesses a mature and composed demeanor. He looks cold, yet he's actually kind. 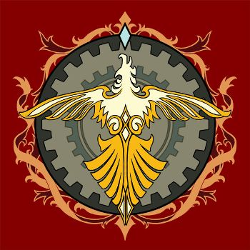 Rubrum is the nation at the southern area of Orience, whose heraldic beast is Suzaku, the Vermillion Bird, and whose traditional color is red. Featuring tropical weather and Victorian-style towns, Rubrum is traditionally governed by the Consortium of Eight, ruling from the capital Akademeia, with Khalia Chival VI as Chancellor. While not as technologically-advanced or refined as Milites or Concordia, being limited to cold weapons (such as swords), Rubrum is nevertheless feared for its soldiers' patriotism and its prowess in magic and summoning Eidolons.
Kurasame Susaya 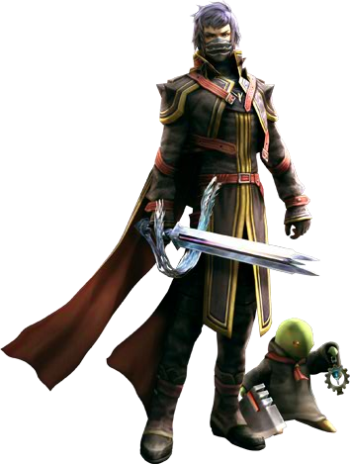 The instructor of Class Zero, and once a renowned warrior in his own right as well as a Class First alumnus. He is accompanied by a Tonberry.

Class Zero's Military Operation Organization and Guidance Logistics Expert (MOOGLE) who gives them missions. Ze is also a member of the Cranberry Knights, a group of thirteen Moogles assigned to the thirteen Classes of the Vermilion Peristylium. 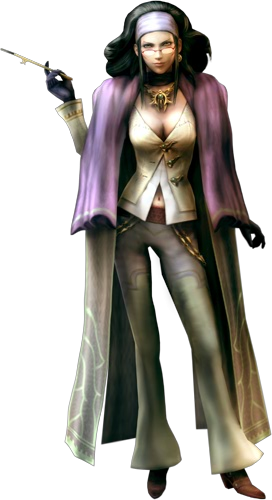 Head of Rubrum's Sorcery Division, Arecia is seen as something of a sorceress. She is the "Mother" of Class Zero, and they are directly loyal to her.

A cadet from Class Ninth and a self-proclaimed idol, as well as a reliable source of information. Serves as Class Zero's link to Intel, and during the second playthrough, serves as a liason for 'Code Crimson'. With minimal assistance, he'll join Class Zero - ostensibly as a spy, but mostly because they're friends.

A fiery merchant girl and Machina's former classmate from Class Second, who offers items and information to Class Zero at outrageous prices. Because of her good grades, she is popular among faculty. Once a good impression is made on her, she pulls strings to get herself into Class Zero.

A Magic Researcher from Class Eleventh. He always has the latest information in relation to magic, which is also his only interest. He later joins Class Zero in phantoma-crafting.

A burly student from Class Fifth who is Lorican on his mother's side, Ryid boasts an impressive build from his daily training with a goal to protect those around him. After Class Zero inspires him to help Rubrum by means other than the front lines, he joins their ranks. 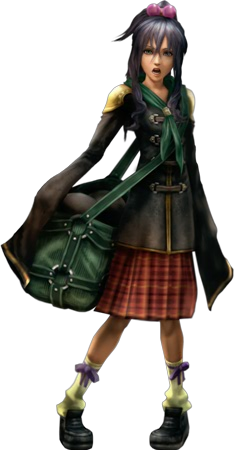 An unusual girl from Class Twelfth, who can be rather dangerous due to a combination of paranoia and skill in making home-made bombs. Earning her friendship is a trial, but sees her join Class Zero.

An orderly assigned to Class Zero who provides them with merchant services. 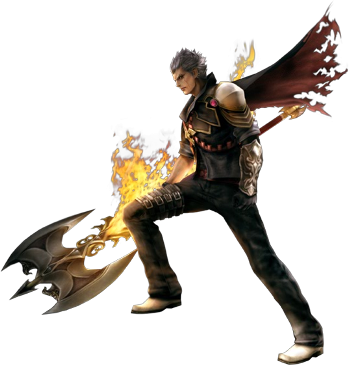 A Vermilion Bird Primus l'Cie who has been branded for many years, Lord Zhuyu is himself a Class Zero alumnus who is slowly losing his memories. As a Primus l'Cie, he possesses incredible combat abilities. 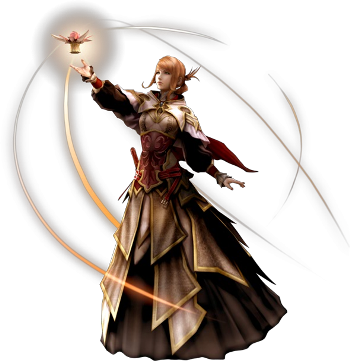 A Vermilion Bird Secundus l'Cie, an expert summoner, and the oldest l'Cie in all of Orience, having lived as early as during a war 500 years past. Her ability as a Secundus l'Cie is the ability to call upon any Eidolon that Rubrum has ever commanded.

A commander of the cadets, currently working as a military officer. She's a friend of Kurasame and Kazusa from their days in Akademeia, hailing from Class Fifth.

As chief of the Sixth Arms Research Lab, Kazusa has the responsibility of developing Rubrum's defenses. He tends to get overly excited or engrossed in his work. He's been friends with Kurasame and Emina ever since he was a Class Eleventh cadet. 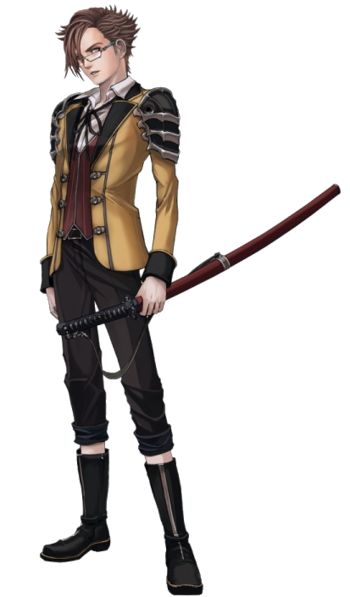 Two mysterious figures who report to Arecia. Both wear the Class Zero uniform with the hood drawn, and Lean also wears a Milites grunt uniform with a mask at one point. Their faces are never shown. 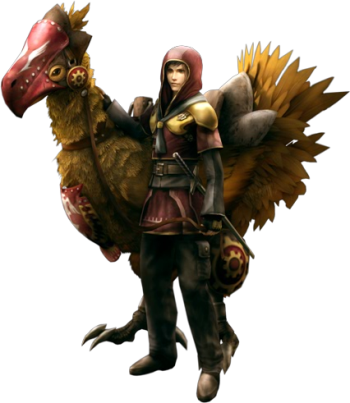 A soldier of Rubrum and Machina's deceased older brother, having perished during a mission to transport the communication devices to Ace, Nine and Queen.

174th principal of the Vermilion Peristylium and leader of Rubrum.

Director of the Student Bureau and member of the Consortium of Eight.

Head of Rubrum's military and member of the Consortium of Eight.

Director of the Academics Bureau and member of the Consortium of Eight.

Head of the Logistics Bureau and member of the Consortium of Eight.. 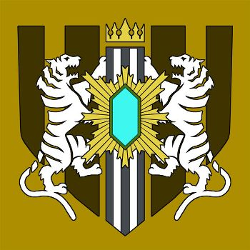 Milites is the western nation of Orience, whose heraldic beast is Byakko, the White Tiger, and whose traditional colors are white and yellow. Milites is traditionally ruled by an Emperor from his winter-battered fastness in Ingram, but due to his sudden disappearance, Marshal Cid Aulstyne took over and became its effective dictator. Its Peristylium specializes in researching the White Tiger Crystal, and unlike the other nations their Crystal can be tapped onto Magitek armor, allowing for mass application of its powers.
Marshal Cid Aulstyne 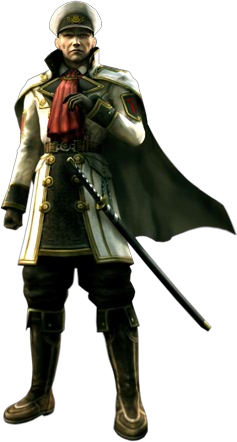 Military leader of Milites and its effective dictator following the mysterious disappearance of its Emperor, leader of the invasion of Rubrum, and the man who broke the Pax Codex between the four nations. 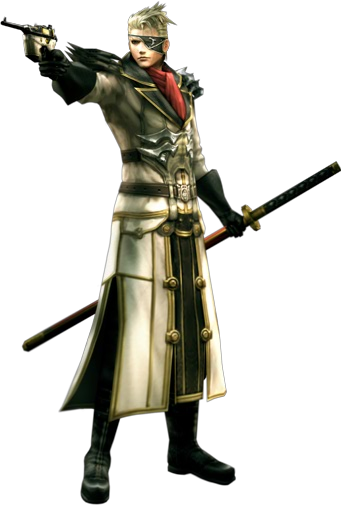 Cid's underling, as well as a competent Magitek pilot riding a mecha/jet hybrid, the Gabriel. 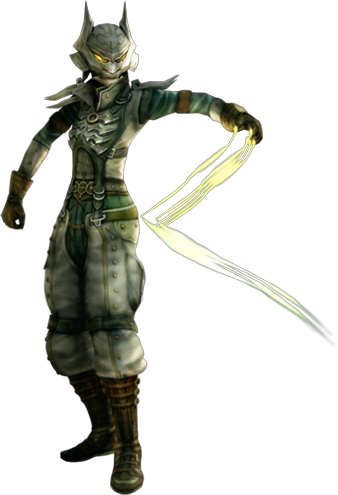 A White Tiger Secundus l'Cie, who wears a fox-themed armor and rides an Anti-Magic Magitek frame called Dainsleif. Her gift as a Secundus l'Cie is the ability to empower and control technology. 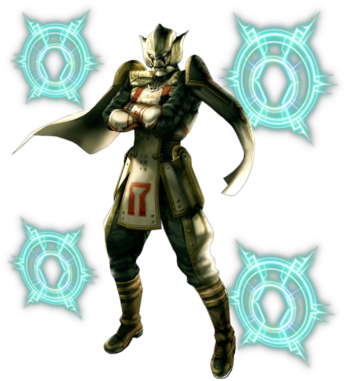 A silent White Tiger Primus l'Cie who has fought many battles in the past. 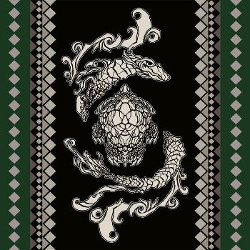 Lorica is the northern nation of Orience, whose heraldic beast is Genbu, the Black Tortoise, and whose traditional color is green. What little is known about Lorica is that its people directly intake the powers of the Crystal, whose Peristylium is located in the eponymous capital, to increase their strength, increasing their body size in turn, and most of its citizens serve as warriors. Unfortunately, the realm has been destroyed with an Ultima Bomb shortly after Class Zero liberated Akademeia from Milites.
Gilgamesh Ashur 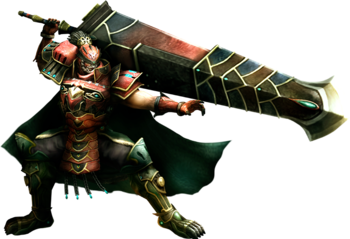 A Black Tortoise l'Cie who has forgotten his Focus. You may recognize this guy as the Rift-hopper from many a Final Fantasy. 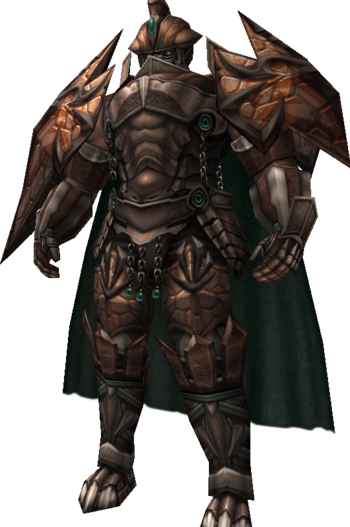 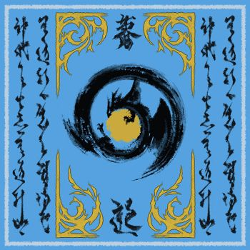 Concordia is the eastern nation of Orience, whose heraldic beast is Soryu (aka Seiryu), the Azure Dragon, and whose traditional color is blue. Notable for its distinctive oriental style, Concordia is a matriarchal society where almost every top government position is held by women (with the sole exception of the King, who holds a largely ceremonial role). Led by Queen Andoria, who rules from the floating city of Mahamayuri, Concordians are known for tapping into the Crystal to communicate with dragons and utilize them in combat.
Andoria Kaya Tranka Fam Forturio 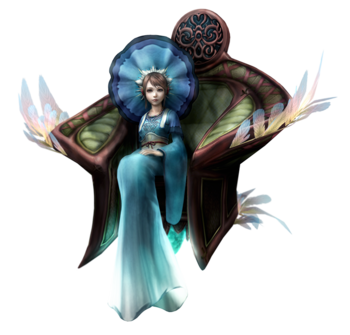 Lady Celestia's preteen son and a Dracoknight of Concordia. 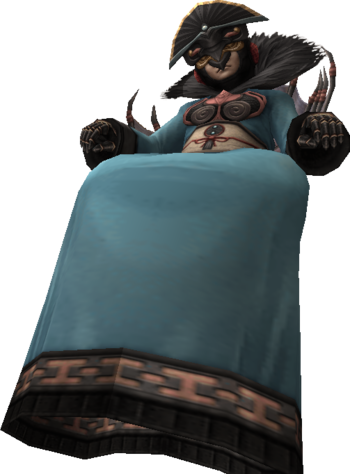 The brash and self-centered king who stands in direct contrast to Andoria.

Warning - all spoilers in these profiles are unmarked.

Fal'cie servant to Lindzei, and Arecia's equal and opposite in the experiment to find and open Etro's Gate. While Arecia wants to do so by having one of Class Zero become Agito, Gala has a different method.
Diva 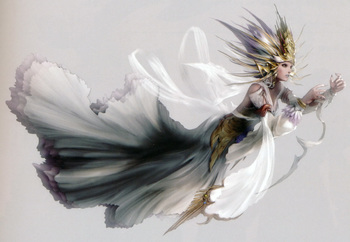 A mysterious woman that acts as narrator. She is the third fal'Cie created, but instead of influencing the experiment herself, she watches and records it all.