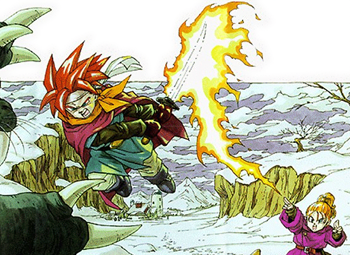 A type of Status Buff spell seen in some RPGs that temporarily imbues the user's weapon with magic, letting them deal out elemental damage or cause Standard Status Effects with their attacks. Among other uses, this is one method to create a Flaming Sword. Usually a preferred tactic of the Magic Knight.

See also Item Crafting, which lets you permanently add effects like these to a weapon. Not to be confused with Elemental Crafting, Elemental Weapons, or Socketed Equipment. Compare and contrast Item Amplifier, The Magic Touch and Elemental Punch.