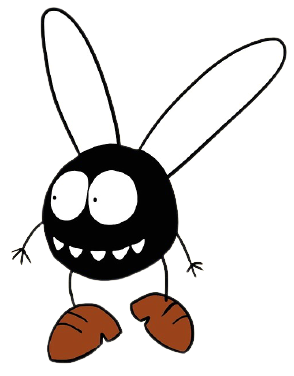 Fly Tales is a really damned obscure Canadian Animated Series. Really obscure. As in, "it only aired in France and Eastern Europe properly, recently came out on DVD in France and its pages on IMDb and The Other Wiki are anorexic" obscure. And it has different names according to which part of the world it was broadcast in. Yeah, that kind. It was so obscure that kids living in New Zealand knew about it too.

The series itself was based on a comic book by Lewis Trondheim called La Mouche, and got adapted to 65 episodes worth of animation in 1999 by Futurikon, with the results being aired on Teletoon. Presumably its title was changed for the English translation to not be confused with that movie. The scripts were written by Trondheim and a bunch of other people you've likely never heard of note Samuel Kaminka, Sacha Jamet, Laurent Turner (his first writing credit, later wrote for Code Lyoko), Isabelle De Catalogne, Françoise Boubil, Jean Helpert (worked on the 1995 Mr. Men And Little Miss series with Boubil) and Alexandre Reverend (went on to The Mysteries of Alfred Hedgehog), and the series as a whole was directed by Norman LeBlanc (who went on to work on W.I.T.C.H.) and Charlie Sansonetti (fresh off directing Gadget Boy & Heather). All episodes are 5 minutes long, and were broadcast either as standalone 5-minute shorts (Australia) or multiple episodes one after another to add up to a 27-minute block (France).

All episodes of Fly Tales revolve around the titular fly (voiced by Brigitte Lecordier), and they all have a simple formula: said fly goes around, meets other anthropomorphic insects (some of them become Recurring Characters), gets into trouble (sometimes with people too) and then moves on to the next adventure. Hilarity Ensues. All the main characters speak in French-sounding gibberish (the kind that requires 8 writers to achieve), and often the plots are based around the modern world seen from the perspective of insects, taking concepts we don't think much about and transposing them to the insect/animal kingdom, or just parodying various well-worn plots but WITH INSECTS!

And the funny thing is? It's way better than it sounds. Starting from our Captain Oblivious protagonist who often manages to screw up something and then just misses the point completely, the Slapstick and the occasional bouts of surreal and darker humour, the one thing that's clear is that Fly Tales is, above all, funny. And occasionally depressing, scary or fluffy too.

Good luck finding it though. Cartoon Network thought it would be a good idea to throw it at 5:00 AM in the UK, gave it a normal airing for a while only in France, Eastern Europe and Australia, and it only came out on DVD in France in 2002 and Australia in 2004. It also aired during some time in Brazil (and possibly in Latin America).