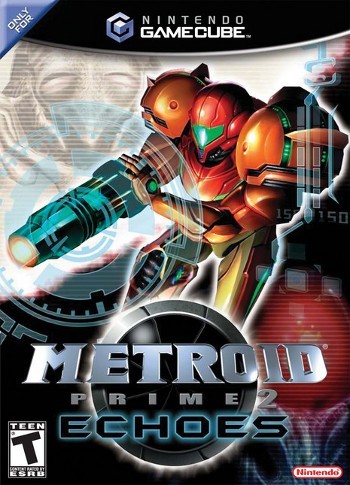 A War Between Light and Darkness.
"Step behind the visor once more. Stalked by a mysterious entity and a warring race called the Ing, Samus Aran must explore the dark and light worlds of a doomed planet as time grows ever shorter..."
— Boxart Tagline
Advertisement:

After her foray on Tallon IV, Aran is sent to investigate the disappearance of the GFS Tyr and its crew complement, the Galactic Federation Marine Corps Task Force Herakles. They had been undergoing a routine patrol in the untamed Dasha Region of the cosmos when they were drawn into a chase with a Space Pirate frigate that ended on the rogue planet Aether. The Hunter makes a flight path for the planet only for a strange purple lightning storm to damage her gunship and leave her stranded while the vessel repairs itself. She soon finds that the Marines were slaughtered down to the last man by unusually aggressive wildlife — and both the dead Marines and the wildlife have a tendency to get possessed by unidentified parasitic organisms that then aim their aggression at her.

Searching for further clues in a great temple hovering over the land, Samus meets U-Mos, the Sentinel of the Luminoth, Aether's native race. He explains that the planet was struck decades ago by a Phazon meteor much like the one that struck Tallon IV, and the impact, combined with the planet's previous dimensional instability, resulted in the creation of Dark Aether, a shadowy alternate world inhabited by the vicious Ing, the same organisms possessing the Marines and wildlife. Since that impact, the Luminoth and the Ing had warred over the planetary energy called the "Light of Aether" that had been split between the two worlds; up until Samus arrived and fortuitously took from the Ing the Energy Transfer Module, the shadowy beasts had been on the verge of taking all of this energy for themselves and leaving Dark Aether as the only remaining world.

U-Mos tasks Samus with returning the Light to the various temples scattered across the planet in order to end the violent reign of the Ing and save Aether from destruction. Yet her quest will not occur without hindrance. Not only must she battle against both the Ing and the stranded Space Pirates, but also against another dangerous offworlder: a dark entity with armor similar to hers and driven by a ravenous hunger for Phazon....

Metroid Prime 2: Echoes is notable as the first Metroid game to feature a multiplayer mode. Unlike later games such as Metroid Prime: Hunters and Metroid Prime: Federation Force, this was an exclusively local mode without online capabilities. The game was later re-released in the Metroid Prime Trilogy compilation for the Wii, while adding motion controls and an achievement system similar to what was introduced in Metroid Prime 3: Corruption along with several other gameplay tweaks.