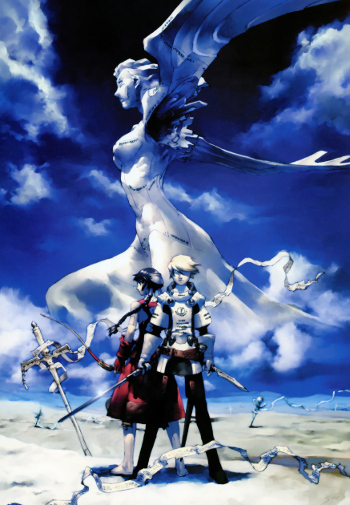 Stella Deus: The Gate of Eternity is an obscure PlayStation 2 Turn-Based Strategy Role-Playing Game published by Atlus and developed by the even more obscure "Pinegrow Studios". The game is a Spiritual Successor to Hoshigami: Ruining Blue Earth: They were developed by the same people, use many of the same gameplay conceits and share a similar Green Aesop plot. The developers learned from Hoshigami's poor reception and averted that game's rather suicidal Nintendo Hardness. Unfortunately, the result is almost Nintendo Easy... but hey, Tropes Are Not Bad, and the game has been lauded as a good "gateway episode" into Strategy RPGs for that very reason.
Advertisement:

The world of "Solum" has been engulfed by a corrosive mist called "Miasma", which threatens to bring about The End of the World as We Know It. High Priestess Lumena, leader of the setting's Corrupt Church, has begun to preach that the Miasma is god's will and everyone should just lie down and wait to die. The Warlord Dignus has taken the opportunity to go Ax-Crazy and travel the world wreaking slaughter: anyone he meets who isn't willing to fight clearly deserves to die. And an alchemist, Viser, is trying to save the world using his inventions—though he keeps having to kill off benign wildlife called "Spirits" to do it. The Hero, Spero, is his apprentice, who believes that it should be possible to Take a Third Option (well, a fourth in this case) and save the world without causing any more harm. This takes more tangible form in the person of Linea, a "Shaman" who can commune with Spirits and claims that, if they can hunt down the "Gate of Eternity" and open it, more Spirits will come in and set everything right.

Gameplay allows the player to deploy up to six characters for battle. There is no Class and Level System in this game (well, technically there is, but it's so linear and non-interactive that it might as well not exist), but that's okay: the "Action Points" system, returning from Hoshigami: Ruining Blue Earth, makes up for it. Every action you could possibly commit takes up a certain amount of AP, and you can mix-and-match any way you want, as long as you've got enough AP remaining in your budget. This gives you enormous flexibility and depth in character disposition: Spero can burn off all his AP moving, or attack three times, or go a short distance and then attack a couple times, or even go a short distance, hit once and then retreat again. You can't overburn like you could in Hoshigami, so watch out: if Spero runs too far forward, he might not be able to do anything else once he gets there. Finally, you can also choose to burn extra AP at the end of a turn, so as to seed the character into the who-goes-next turn queue at an opportune moment.

The main gameplay gimmick was "Zone Effects" and their various uses. Each character would be surrounded by a configuration of yellow panels, which indicated their zone of influence, and could apply various effects to this zone; Spero's, for instance, increased all his allies' Dodge rates, while Dignus' inflicts various Status Effects on his enemies. If two (or more) characters had a foe within their zones, they could initiate a Combination Attack for extra damage; if those characters had plot significance with each other, they would throw an extra-special attack animation for even more extra damage. Unlike most gimmicks, the enemy can—and does—use this feature against you.