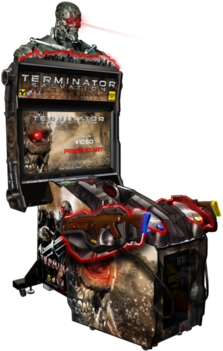 The player plays the role of John Connor during the war opposing the human resistance to the machines of Skynet. The game consists of two selectable missions: seek and destroy the secret lab where Skynet conducts experiments on humans, or escort refugees to a safehouse and destroy Skynet. The player faces whole armies of T-600, T-7T, Aerostats and Mototerminators. He can find grenades, shotguns, and miniguns on his way. During some sequences, it is possible to use heavy machine guns mounted on vehicles (helicopter, pickup).

A full playthrough of the game can be watched here