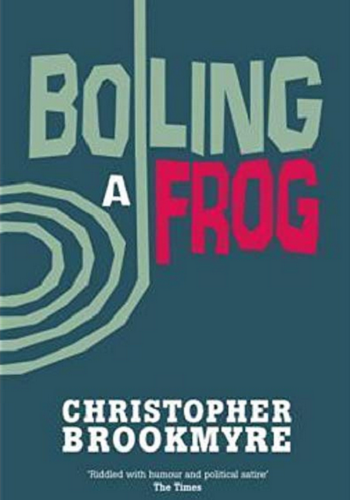 Boiling a Frog is a novel by Scottish author Christopher Brookmyre.
Advertisement:

It was published in 2000 and is the third book featuring Brookmyre's recurring character journalist Jack Parlabane.

Who is, as of the start of the book, having a miserable time: He's estranged from his wife due to an alcohol induced indiscretion on her part - him finding out about it by way of malicious tabloid mudslinging didn't help matters - and he's in prison, his erhmm...unorthodox investigative methods having finally caught up with him. And as Parlabane is about to discover, prison might not be the best place to be if your previous efforts have secured other, and not very nice, people's lengthy stay in the same facility.

Meanwhile, out in the free world, scandals on the political scene have presented the Roman Catholic church with the opportunity to cast itself in the role of the the guardian of morality, an opportunity it exploits fully. Power struggles, face-saving maneuvers and dirty tricks played by priests, politicians and those mightiest of modern creatures, the public relations people, ensue.