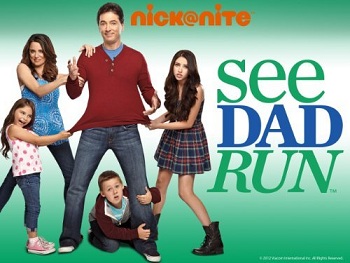 See Dad Run is a sitcom reserved for the Nick @ Nite block that premiered on October 6, 2012. It tells the story of an actor named David Hobbs (Scott Baio) who has just finished his own sitcom acting as a dad, and then he is presented a new personal trial that he fears the most: acting as a real dad for his family while his wife, Amy Hobbs (Alanna Ubach), can get back to the spotlight as the soap-opera star she was.
Advertisement:

It ended after a three season run.

This series provides examples of:
Advertisement: