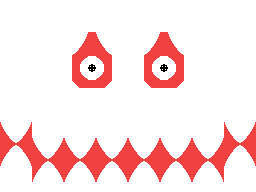 Hunt the Wumpus is a text-based hunting game from 1972. It was written in BASIC by Gregory Yob on mainframes at the University of Massachusetts and published as a type-in program in books and magazines throughout The '70s. In 1980, it was remade as a graphical puzzle game for the TI-99/4A.

The Wumpus is a monster that lives in a cave of 20 rooms, connected by tunnels, in the shape of a dodecahedron — each room lies on one of the dodecahedron's vertices, and connects to three others. You start in one room, with five 'crooked arrows' that can fly around corners. The game gives you your room number, the numbers of the three rooms connected to yours, and warns you if Super Bats, Bottomless Pits, or the Wumpus are in an adjacent room. But it doesn't tell you which of the three rooms the warning is coming from. By wandering from room to room, you build a map that can reveal the location of the Wumpus. Once you know that, you can shoot an arrow from up to five rooms away and guide it to the kill.

If you enter a room with bats, they will carry you to a random room, which may contain a pit or the Wumpus. If you fall down a pit, you die. If you enter the Wumpus' room, or shoot an arrow and miss, you will awake it and it will move into another room. If you run into it again now that it's awake, it will eat you. You will also lose if you run out of arrows, or die by shooting yourself. This can happen if you tell the arrow to go to rooms that aren't directly connected, as it will randomly choose the next room.

The TI version uses randomly generated grid-based maps that Wrap Around in both directions. There is only one arrow with a range of one room. The Wumpus is always awake, and if you shoot your arrow and miss, it comes to eat you. Bat rooms have no warnings (though you may be able to pass through the room once, with the bats asleep), pit rooms have one warning room (slime on the walls) and the Wumpus has two warning rooms (blood on the ground). There are three Difficulty Levels, which determine the complexity of the map, and "Blindfold" and "Express" modes that make navigation harder.

Hunt The Wumpus provides examples of:

The TI-99/4A version provides examples of: