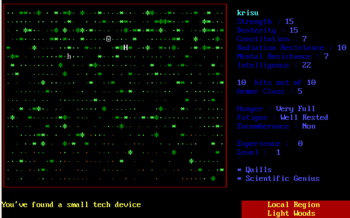 Alpha Man is a humorous Roguelike game set in post-apocalyptic New York's Central Park, which is overgrown with flora and full of dangerous fauna. Many items in the game and the general setting is loosely based on the tabletop RPG Gamma World. The main character begins with randomly selected mutant powers and can find a large variety of tools (anything from a cheese grater to a light sabre) and berries that give special effects, but by far the simplest solution to killing enemies is to hit them with a melee weapon. The creatures are varied and humorous, from "Prairie Chickens" to "Snails" that assault the player's brain, "Purple Mold" that makes the player sick, to specialized characters like "Elvis Impersonators" that hit the player with belt buckles. It is shareware, but considering it was originally made in 1995 if you send any money to the address, you're not likely to get it back.
Advertisement:

It has its own short wiki

and the Mutant Future Wiki

(you'll need DOSBox or something similar if you can't run DOS programs normally).

Some tropes used in the game: