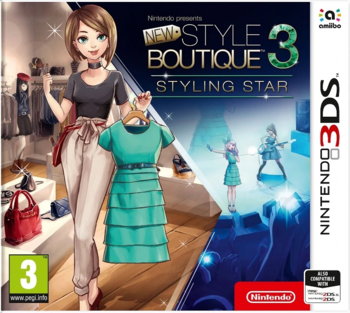 The fourth game in the Style Boutique series, which released on the 3DS in 2017.

This time, your uncle Tim has just gone and left you his boutique so he can travel the world. Fortunately, you have a tremendous talent for fashion, and take to your new responsibilities like a duck to water. In between managing your shop and helping out with your customers' various fashion woes, you find yourself becoming the personal stylist to three aspiring pop singers, and quickly get embroiled in their own personal drama and struggles.

The clothing selection has expanded yet again, and now includes watches, bracelets, and headphones, bringing the total number of unique items up to 20,000. amiibo are once again compatible, but this time they unlock patterns for use in the design feature rather than unique clothes. The beautician now offers nails as well as makeup, and it is once again possible to sell men's clothes, albeit in a different shop which only provides XP and not money.

The writing was particulary praised by multiple critics, and because the story centres around the music industry, multiple songs were recorded specifically for the game.