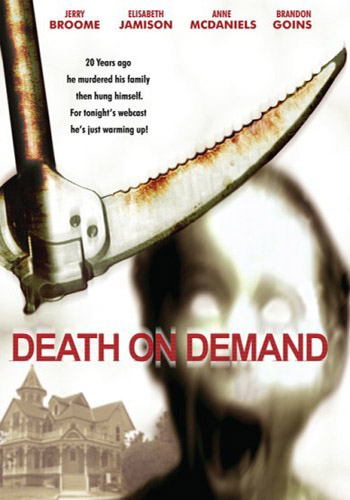 Death on Demand is a supernatural Slasher Movie, made in 2008.

In 1988, famous mountaineer Sean McIntyre suffered a psychotic break while scaling the Himalayas, and murdered a Sherpa after hallucinating he was a Yeti (yes, really). After this incident, Sean was extradited back to America, and was never quite the same, believing he was cursed and something "evil" was out to get him. While presumably awaiting trial, Sean had another mental breakdown on Thanksgiving, and murdered his wife, mother in-law and two daughters before hanging himself with one of his daughter's dolls in hand.

Twenty years later, entrepreneur Richard DeNola and his partner Peter decide to hold a Halloween webcast, dubbed Death on Demand, in the abandoned McIntyre house, having five college students (Darla Hansen, her boyfriend Biff Balstead, Bradley Manly, his girlfriend Tammy, and a girl named Haydn) as contestants, along with sultry porn star Velvet Luv. The group's goal is to find the key to an exit using clues left around house while hundreds watch them online, mostly hoping for some steamy action. Unfortunately for the cast and crew of Death on Demand, a séance they hold (using the doll Sean died with as a focusing point) before the game begins is actually successful, and summons Sean's insane ghost, which proceeds to make Death on Demand live up to its name with an assortment of mountain climbing gear.

All in all, a pretty shameless rip-off of Halloween: Resurrection. Has been dubbed either So Okay, It's Average or So Bad, It's Good by most reviewers.

Also, the director totally used to work on stuff like Sesame Street and The Naked Brothers Band.