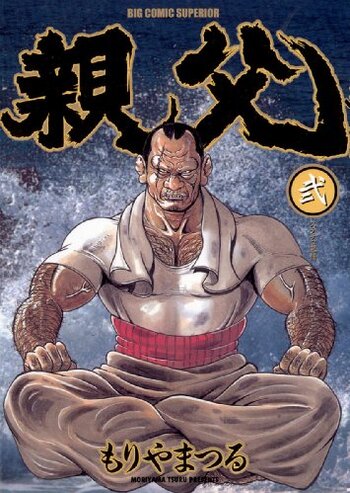 Covers Always Lie incarnated, Oyaji is more than just violence!
Surrounded by violence for as long as he can remember Takeshi Kumada, the titular Oyaji, has steeled himself into a tremendously tough man, growing to become the very essence of manliness himself in order to live his life in peace, being fully capable of demolishing anyone who dares to disrupt his quiet path.
Advertisement:

However, Oyaji has his wife, Taeko Kumada and two children under his wing, Yosuke Kumada and Kumiko Kumada, a life of violence can never end well for a man with a family to care for, thus it didn’t take long for the local yakuza to try and get back at Oyaji for never allowing himself to be pushed around by petty criminals; the thugs tried to burn his home down with him and the whole family sleeping inside at night, that of course was a terrible mistake by the yakuza, with the only fire truly ignited that night being Oyaji’s unrivaled anger.

The enraged Oyaji went and proceeded to kill the entire yakuza sub-family that dared to try kill him and his family in a single night, although that action came with a hefty price, Oyaji was predictably sentenced to serve time for multiple homicides.

Then, 15 years later Oyaji was free to go, for a mysterious reason, now he tries to reconnect with his family who clearly are in disarray due his long absence; Oyaji’s son Yosuke and daughter Kumiko have become problematic young adults, with their father back home things are about to change.

Oyaji (lit. Old Man/Father) is a Seinen manga authored and drawn by Tsuru Moriyama in the year 2000, originally published in Big Comic Superior, by Shogakukan, later compiled in 3 volumes; what it seems like a hardcore violent action series on the surface, it actually carries an entire different message throughout its course, by the end it is guaranteed to make one reflect on what it means to be a father.